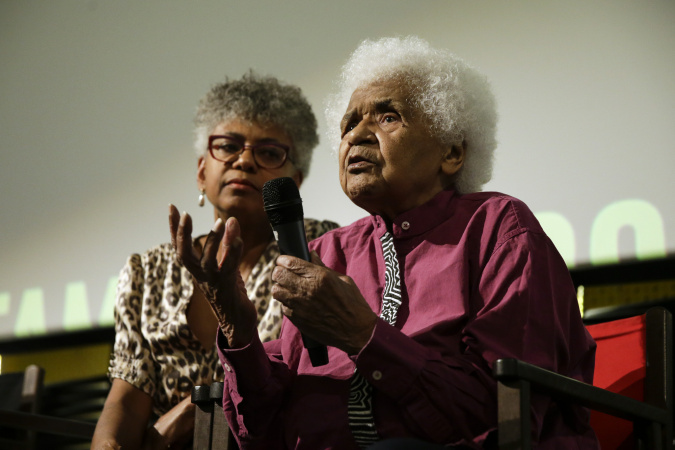 This evening in the Sala Azcona at the Cineteca Madrid, not a single seat was free for the opening session of the retrospective dedicated by DocumentaMadrid and the Reina Sofía Museum to the filmmaker Sarah Maldoror. Accompanied by her two daughters and her granddaughter, Maldoror elicited applause from the full audience with each of her interventions.

Considered the matriarch of Négritude cinema, the ninety-year-old director devoted a great deal of her intervention to speaking about childhood and asked those attending to do whatever it takes to awaken curiosity in children and give them a chance to speak: "Because education doesn't begin with a book, but rather with an image. Children experience cinema and that makes them dream. To help them, we need to get back to poetry, theater and cinema. We must have them discover other characters, Tom Thumb is fine, but The Little Prince is less silly," she added, amused.

DocumentaMadrid and the Reina Sofía Museum resume their collaboration with this retrospective, which will show for the first time in Madrid a large part of the work by the filmmaker and artist, a pioneer in Pan-African cinema from a feminist and anticolonial approach.  Visiting Madrid with the collaboration of the Institut Français, Sarah Maldoror presented the opening session with two of her most emblematic films: Monangambée and Sambizanga.

During her talk with the public about the meaning of her work, she explained that the reason she filmed the wars was a need she felt to pay homage to those who sacrificed themselves and were used as shields. "Vietnam is very far away, and I wanted to talk about these wars where people returned crippled, having sacrificed for a country that was not their own," she said.

On Monday, May 13 at the Sabatini Auditorium of the Reina Sofía Museum, the round table "Sarah Maldoror, in context" will be held, with the participation of experts on her film work, such as the artist Mathieu Kleyebe Abonnenc and Olivier Hadouchi, writer and film programmer, in addition to her daughter Annouchka de Andrade, who collaborates with Maldoror and is the director of the Amiens International Film Festival.

Asked to make a recommendation to young people wishing to follow in the footsteps of her filmmaking, Maldoror replied: "I have no lesson to give young people. If they want to make films, what they have to learn is to get up early, learn to struggle and to fight. And not to give up on what you want to do. "

See here the complete program of the film series dedicated to the work of Sarah Maldoror.