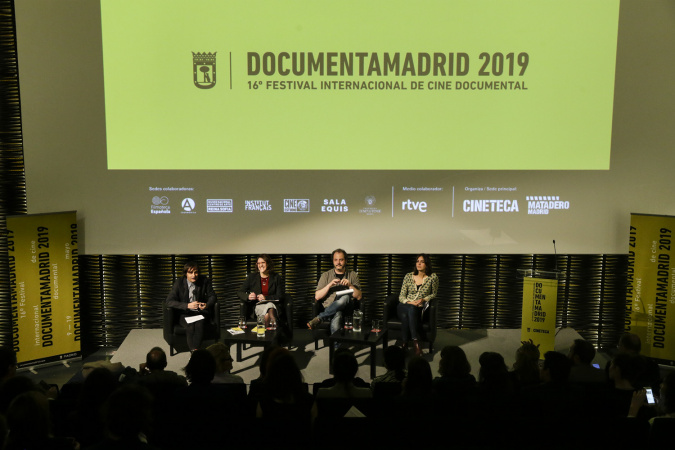 With just a few days until the 16th edition begins, the DocumentaMadrid Festival is getting ready to overtake the city on Friday, May 9 with an extensive schedule of international documentary cinema and a diverse offer of parallel activities for both professionals in the audiovisual sector as well as anyone interested in contemporary documentary film. The pioneering African filmmaker Sarah Maldoror, the Austrian director Ruth Beckermann -winner of the Best Documentary at the 2018 Berlin Festival-, and the visual and sound artist Carlos Casas, together with Nicolas Philibert and Marília Rocha, will be some of the guests to the 16th edition of the international film festival promoted by the Madrid City Council.

For ten days, DocumentaMadrid's main venue, the Cineteca Madrid, will be the epicenter of the extensive official competitive section, made up of 53 films from over thirty countries around the world by over 30 international filmmakers who will be traveling to Madrid during these days to present their films.

At the Nave 0 of Matadero Madrid, the works of the sound and visual artist Carlos Casas will be shown, the Cine Doré at the Spanish Film Archives will host a wide-ranging retrospective of the Austrian filmmaker Ruth Beckermann, and at the Reina Sofía Museum a retrospective of Sarah Maldoror's film work will be offered, most of which has never been screened in Spain. At the Institut Français of Madrid, audiences in Madrid get a chance to see the latest work by such filmmakers as Rithy Panh and Nicolas Philibert, while the Círculo de Bellas Artes and the Information Sciences Department of the Complutense University of Madrid will be hosting the War Scenarios film series. A selection of the Festival's Official Section can also be enjoyed at the Sala Equis, which will also screen the winning films.

Documentary film for all ages

For the same purpose, it is also bringing documentary film to young people through the initiative From the classroom to the cinema, a unique chance for primary and secondary schoolchildren throughout Madrid to see free matinee sessions. This year, the students attending at the Cineteca Madrid will get to watch and debate in a colloquium afterwards with the directors of the films Apuntes para una herencia (Federico Robles), Idrissa: Chronicle of an Ordinary Death (Xavier Artigas and Xapo Ortega), The Fourth Kingdom (Adán Aliaga, Àlex Lora), Madame (Stéphane Riethauser), Ojo guareña (Edurne Rubio) and SELFIE (Agostino Ferrente).

For the first time, the educational matinee sessions will be extended to the university setting thanks to the collaboration with the Complutense University of Madrid. In the coming days, an announcement will be made regarding the films sent in by the UCM students participating in the first ever Academic Call for entries by DocumentaMadrid and the Department of Information Sciences, in collaboration with the platform Filmin, where they were invited to share an audiovisual reflection on the aftermath of wars as it relates to the film series "War scenarios". On May 13, 14, 16 and  17 at the Department of Information Sciences, their work will be screened during the film series' scheduled sessions: Let There Be Light (J. Huston, 1946), Operation Jane Walk (L. Müllner y R. Klengel, 2018), Pirotecnia (F. Atehortúa, 2019), Srbenka (N. Slijepcevic, 2018), Still Recording (S. Al Batal, G. Ayoub, 2018).

Experiences in immersive cinema, the limits of creativity

From May 10th to the 17th, DocumentaMadrid is offering a wide range of parallel activities to professionals in the audiovisual industry and to anyone interested in the multiple expressions of the documentary genre. All of them are free, though some require prior registration on the festival website (documentamadrid.com) before May 7.

One of the highlights on the first weekend of the festival will be the two live cinema sessions put on by the sound and visual artist Carlos Casas, who will be presenting the retrospective dedicated to him by DocumentaMadrid and Matadero Madrid as part of the new program Depth of field hosted by the cultural center of Madrid.

On Friday, May 10 at 6 pm, the world premiere of the double vinyl MUTIA will be held at Nave 0. Casas will do a live performance of a piece of sound film, a reworking of his latest work, Cemetery , where the artist tries to locate the mythical cemetery that elephants go to before they die. "The album is a way of inviting the public to take that trip with me," explains Casas.

At Nave 0 at the Matadero on Sunday the 12th from 12 noon to 2 pm, Carlos Casas will present his work Avalanche, a site-specific project which started in 2009 and has been presented in varying formats around the world. More than just a film, this is "an audiovisual meditation on disappearance and time, as well as the unstoppable avalanche of civilization", in the artist's own words. Avalanche transports viewers to Hichigh, one of the most remote villages on the planet, located in the Pamir mountains between Tajikistan and Afghanistan. Admission to both events is free until full capacity is reached.

Round table “Sarah Maldoror, in context"

On Monday the 13th at 7:00 pm at the Reina Sofia Museum's Sabatini Auditorium, the round table "Sarah Maldoror, in context" will be held in order to reflect on Maldoror's place in her contemporary return and on the teachings, poetics and politics that stem from her cinema and vital practice. The participants in the debate will be the artist Mathieu Kleyebe Abonnenc, the film historian Olivier Hadouchi, and the filmmaker's daughter and collaborator Annouchka de Andrade. Prior to the round table moderated by Chema González (Head of Cultural Activities at the Reina Sofía Museum), the film Préface à des fusils pour banta (M. Kleyebe Abonnenc, 2011) will be screened, which deals with the shooting of a missing film made by Maldoror. Admission to the activities at the Reina Sofía Museum are free until full capacity is reached.

In addition, the Brazilian filmmaker Marília Rocha will be offering a discussion at the Casa de América on May 16 at 6 pm, before the screening of her film Aboio (2005), which gives her vision on the relationship between cinema, literature and landscape. From an ongoing project, Rocha proposes having a conversation about how cinema can depict the landscape and its social histories, recognizing its role as an integral part of the process of literary creation. The talk will be held in the Cervantes Room at the Casa de América and admission will be free until full capacity is reached.

Can machines help us be more creative? To tackle this question, the DocumentaMadrid Festival is holding the Seminar Automating Creativity, which is to be held on Saturday May 11th at the Plató Hall in the Cineteca Madrid. This activity on Artificial Intelligence and its relationship with the arts will be attended by the curator, artist and researcher Luba Eliott,  known for her collaborations with The Photographers' Gallery, her work for the Leverhulme Center for the Future of Intelligence and for companies like Google (the conference will be in English with no translation provided). Also participating will be Jorge Caballero and Anna Giralt, teachers and filmmakers who will present their vision on the possible applications of artificial intelligence in documentary filmmaking. The seminar will end with an analysis of automatic processes in audiovisual writing at the conference by Pablo Gervás, a doctorate in computer science and expert in AI. Free admission with prior registration through this form available until May 7.

Once again, DocumentaMadrid is reflecting on Pedagogies of the Creative Process and will host two workshops offered by the new working group "The Playground: Learning collective, cinema-audiovisual" which has already posted its sold out sign, and will be held on Saturday, May 11 at the Cineteca Madrid under the title  "Sharing methods"  and on Sunday, May 12  with an invitation to reflect collectively through the audiovisual practicum  "Thinking while doing".