Over 16,000 people attended the recent edition of the festival DocumentaMadrid 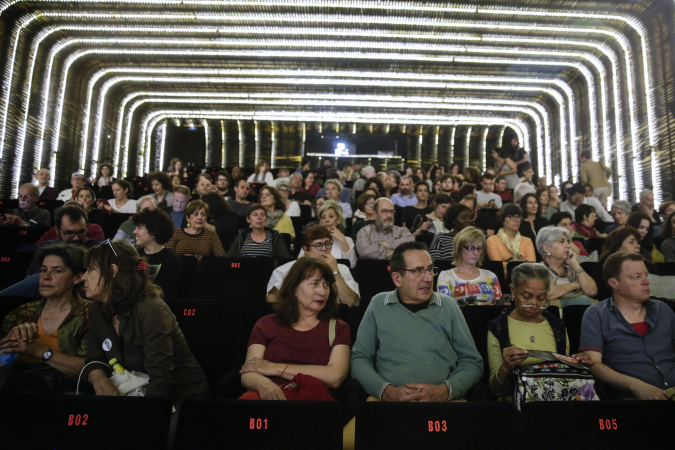 DocumentaMadrid drew even more spectators to this year’s edition, in excess of 16,000 attendees, an increase compared to the 14,500 recorded the previous year. The 16th edition of the International Documentary Film Festival promoted by the City Council of Madrid screened over 120 films from 35 different countries, of which 53 competed in the official sections. A significant percentage of them made their premieres in Spain and more than ten made their international premieres.

"We have decided to program complex films of enormous artistic value and, at times, not without certain risks. Because Madrid deserves an ambitious cultural project, while always holding to our obligation of bringing documentary cinema to all audiences. DocumentaMadrid is an internationally-significant film festival and we are living in an exciting time for the city and for documentary filmmakers in Spain", explains Andrea Guzmán, co-director of DocumentaMadrid. "We are optimistic and hope this opportunity can be seized upon thanks to the support that DocumentaMadrid, a fully public festival, has managed to attract from public and private agents from the city's film culture," adds its co-director David Varela.

DocumentaMadrid holds fast to its commitment of bringing contemporary documentary film and new expressions of the genre to audiences throughout the city. In addition to its main venue, Cineteca Madrid, it has also scheduled screenings at eight other partnering spaces, such as Nave 0 at the Matadero Madrid, the Filmoteca Española, Casa de América, Reina Sofía Museum, Institut Français of Madrid, the Círculo de Bellas Artes, Sala Equis and the Complutense University of Madrid.

Cultural centers have also partnered up with the festival through "Documenta goes local" with sessions screening its Official Section for residents of Latina, Hortaleza, Tetuán, Carabanchel, Chamberí, Ciudad Lineal and Villaverde, where they get the chance to chat with the directors of the films in the discussion sessions afterwards. In addition, the initiative "From Classroom to the Cinema" has reached more than 600 high school students in the Community of Madrid with matinee showings of films like the Italian Selfie, the Spanish Ojo Guareña and the Swiss Madame.

A date not to be missed for audiovisual professionals in Madrid

Companies in the audiovisual sector have backed the event in Madrid and for the first time ever, the festival has had RTVE as a partnering media outlet, in addition to the participation of the prestigious channel ARTE. Various companies in the audiovisual industry have also given out awards, such as Filmin, Movistar +, Screenly, LENS, TAI, Madrid Film Institute, as well as the partners on the CORTE FINAL Award: DRAX audio, Aracne DC, Numax, Docma, Festhome, 36caracteres.

Producers, directors and technicians in the audiovisual sector have filled round table discussions and meetings with international guests, such as the one organized in collaboration with the Institut Français and the standard-bearer in European culture, the channel ARTE.  At the gathering with its editorial director Bruno Patiño, producers and directors got the chance to learn all the details of how to collaborate with the French-German channel. The importance of sound in filmmaking also sparked great interest at the round table "How to make good sound and not die trying" organized in collaboration with the DRAX audio studio.

At the 2nd CORTE FINAL Professional Forum, four feature film projects took part to get advice from professionals such as Marta Andreu, Andrés Duque, Isabela Monteiro and Valérie Delpierre. The CORTE FINAL Award for postproduction and distribution, which will aide in getting the film completed, has gone this year to Pedra Pàtria by Maciá Florit, an autobiographical reflection on Menorcan identity.

A varied program with over 120 films

"Complementarity and transversality are two of the keys to our programming, so that viewers can design or make their own routes to and from all the venues located throughout the city and between the different sections of the festival", explains David Varela, co-director of DocumentaMadrid. In this vein, festival-goers could learn about the impact of war on people and places in the film series "War Scenarios" at the Círculo de Bellas Artes and at the Complutense University of Madrid . And along with the Casa de América, the festival offered a film correspondence from the two sides of the Atlantic in the series "Signed Mirrors".

The 16th edition was attended by such distinguished guests as the ninety-year-old, director and pioneer of Négritude film, Sarah Maldoror, to whom DocumentaMadrid dedicated an unprecedented retrospective in collaboration with the Reina Sofía Museum, where an emotional encounter was held with the public and with her daughters and granddaughters at her side. The Austrian director Ruth Beckermann was in Madrid to receive the 2019 DocumentaMadrid Honorary Award and to present her retrospective in collaboration with Filmoteca Española. The Madrid audience members enthusiastically welcomed the retrospective of the artist Carlos Casas , who did two live performances during the Festival and presented his exhibition at the Nave 0 at Matadero Madrid, which can still be visited until the end of June, together with the Carte Blanche with which Carlos Casas has programmed a selection of films at the Cineteca Madrid.

Other filmmakers such as Nicolas Philibert and Marilia Rocha also traveled to Madrid to meet with audiences at the festival. The French director took part in the colloquium following the screening of his film De chaque instant, which was featured in the special screening that was programmed in partnership with the Institut Français. While the Brazilian filmmaker gave a talk at the Casa de América on film, literature and landscape in which she shared her own creative process.

The relationship between artificial intelligence and artistic creation was the focus of the seminar "Automating creativity " at the Cineteca Madrid, in an intense morning in which researchers and artists participated, like Luba Elliott, Jorge Caballero, Anna Giralt and Pablo Gervás.

Continuing the work of bringing documentary film and audiovisual creation into the educational settings, the meeting Pedagogy of the Creative Process II, was organized and put on by El patio: Film-audiovisual learning collective. Over two days, dozens of people shared their projects on using film in the classroom, while also participating in a workshop on audiovisual creation in the community.

The awards of the 16th edition

Thousands of audience members cast their votes for the films Midnight Traveler, directed by Hassan Fazili and City of Children by Arantxa Hernández, making them the winners of the Cineteca Madrid Audience Award. The two movies will be programmed again for screenings in the months to come at the cinema in the Matadero.

In the International Competitive Section, the jury awarded the Best Feature Film Award to Madame by Swiss director Stéphane Riethauser, while the Best Short Film Award went Ex Aequo to City of Children and La bala de Sandoval. In the National Competitive Section, the jury awarded the feature film The Fourth Kingdom, directed by Àlex Lora and Adán Aliaga, and in the Best Short Film category, the winner was Greykey by Enric Ribes. In the Fugas Section -dedicated to the most innovative and hybrid filmmaking- Mitra by Jorge Leon took away the First Jury Prize, while Second Prize went to Lapü by César Alejandro Jaimes and Juan Pablo Polanco.

At this year's edition, € 55,500 in cash award-winnings were given out, in addition to other awards that include consulting and various audiovisual production and distribution services provided by partnering audiovisual companies.