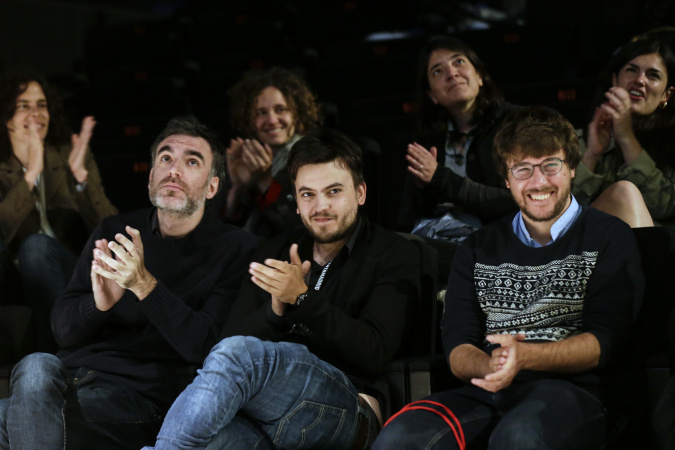 In the second edition of the Corte Final Professional Forum, in which four feature-length projects in an advanced state of editing and post-production have taken part, the winner was Pedra pàtria by Maciá Florit. The jury entrusted with granting this honor was made up of the Spanish filmmaker Andrés Duque, the Brazilian editor Isabela Monteiro de Castro, and the producer Valérie Delpierre.

This award was granted with collaboration from several major companies in the audiovisual sector, with whose support the film will be completed under the best possible technical and creative conditions. The feature film Pedra patria by Maciá Florit will get a sound postproduction service from DRAX audio, an image post-production service from Aracne DC, and distribution at festivals at the hands of Festhome  and subtitling from 36caracteres. In addition, they will get a web design, programming and support service from the Galician cooperative NUMAX, and a cash prize of 1,000 euros awarded by the DOCMA association.

During the reading of the award winners, announcements were also made as to the awards given by various companies collaborating with the International Documentary Film Festival promoted by the Madrid City Council, such as Movistar+, Screenly, Escuela Lens, Instituto del Cine, Filmin and Escuela TAI.

The feature film winner of the Jury Prize in the National Section, The Fourth Kingdom, has also won the Filmin Award, for which the platform will provide consulting and support during its premiere on the platform.  Its jury, composed of Jaume Ripoll and Elodie Mellado, has pointed to "its indefatigable vitality, its ability to transport us to a fairer world where learning, redemption and community are a real possiblity, all through a charismatic group of characters who, in times of darkness, show us that there are still places where light can make its way in".

Among the filmmakers participating in the National Fugas Short Film Competition, the jury made up of students in the Master's Degree program in Creative Documentary and Experimental Cinema at the TAI University Arts Center have given the DOC-TAI Award for up and coming talent to filmmaker María Elorza for her film Ancora Lucciole, which was also a Jury Special Mention in the National Short Film Section. This award consists of a program of consultations by widely recognized professionals for their next project.

For its part, Una corriente salvaje by Nuria Ibáñez has won the Best Sound Award in the National Feature Film Competition, awarded by the Instituto del Cine of Madrid. Filippo Restelli and Bernat Fortiana are responsible for the sound of the winning film Una corriente salvaje. Meanwhile, the Escuela Lens has selected the film Out of the gardens by Quimu Casalprim and Berta Valin as deserving of the Lens Award for Best Photography.

The content team of Movistar + has awarded the Movistar Award+ for Best Ibero-American Documentary Feature to Teatro de Guerra,  a film directed by Lola Arias and co-produced between Argentina, Spain and Germany. With this award, Movistar Plus acquires the film's broadcasting rights.

The jury for the Screenly Award, made up of Marc Prades, Irene Visa and Raquel Tomàs, has decided to grant this to Idrissa, crònica d'una mort qualsevol  by Xavier Artigas and Xapo Ortega "to join in on this documentary film's exercise in memory and reparations and facilitate its distribution in movie theaters in Spain".