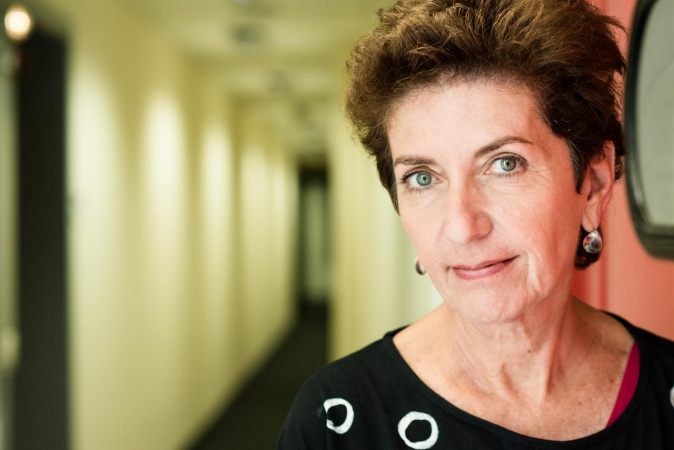 ●      Beckermann devotes a great deal of her film to historical memory, social struggles and identity-building in Europe and the Middle East, themes she addresses through various formats, such as the autobiographical essay and road movies

●      Director of the award-winning documentary at the 2018 Berlinale, The Waldheim Waltz, she will travel to Madrid to be honored at DocumentaMadrid during the Festival's Opening Ceremony

●      The Austrian director and journalist’s entire film work of will be shown in the retrospective "Ruth Beckermann: Strategies of the political lie" at the Cine Doré during the DocumentaMadrid Festival, between 9 and 19 May

Social struggles, the historical memory of Nazism and the Holocaust, the analysis of identity-building in Europe and the Middle East, the road movie and the autobiographical essay: these are constants that run throughout the film work of Austrian director Ruth Beckermann, who will be visiting the city of Madrid in May as a special invited guest to the DocumentaMadrid Festival. The Cine Doré will once again be the Festival's official venue to host the first complete retrospective of her film work: "Ruth Beckermann: Strategies of the political lie". Under this title, the Filmoteca Española and DocumentaMadrid offer a program covering her entire filmography: sixteen films directed over the last four decades, several of which have never been released in Spain.

On May 9, the day Europe is celebrated with the commemoration of the end of World War II, the Austrian director will receive the DocumentaMadrid Honorary Award at the festival's opening ceremony, a recognition that last year was received by the American filmmaker Ross McElwee.

David Varela, co-director of DocumentaMadrid, sees the Ruth Beckermann retrospective as a unique chance for our country to discover one of the most outstanding and recognized figures in contemporary documentary film. "Her incisive and poetic view of reality and historical memory will give us an opportunity to reflect in depth on our current socio-political situation and on our contradictory relationship with the past," explains Varela.

"When the DocumentaMadrid team proposed doing a complete Beckermann retrospective, we saw it as a perfect fit with the programming interests of the Cine Doré. As the national film archive, the two axes upon which we are structured are social and filmic memory and history. Film series like this one are our raison d'être, they are part of our DNA ", said Josetxo Cerdán, director of the Filmoteca Española.

Strategies of the political lie

Born in Vienna in 1952 to Holocaust survivors, Ruth Beckermann studied Journalism and Art History in Tel Aviv, New York and Vienna, where she received her doctorate in 1977. She started making film in the late seventies out of an urgent need to make the social struggles and strikes taking place in Austria during those years known. This was her focus when making her first three films, Arena Squatted (1977), Suddenly, a Strike (1978) and The Steel Hammer Out There on the Grass (1981), all co-directed with Josef Aichholzer.

However, it was her films about the memory of Nazism, World War II and the Holocaust that established her importance as a filmmaker. From a very young age, Beckermann felt compelled to reflect on this issue, and she expressed it in her filmmaking using various perspectives and formats. In Return to Vienna (1983) she gives us a look at the particular vision of a Viennese political activist who experienced first-hand the rise of Nazism; in Paper Bridge (1987), she turns her focus to her family history and, through her own voice over, shows her parents and grandparents beginning to remember the Holocaust--her grandmother tells of how she pretended to be mute and would run off into forest to listen to her own voice-; but she also illustrates the more idyllic and utopian vision of the state of Israel in Towards Jerusalem (1991), a road movie in which the ideal expectations come face to face with reality. Fifteen years after this journey, Beckermann returned to Israel to make Zorro's Bar Mitzvah (2006), an exploration of Israeli adolescence through Judaism's most important religious and social celebration, the Bar Mitzvah.

One of the most relevant films in her career is East of War (1996), in which she calls on visitors at the famous exhibition held in Vienna to confront society with the crimes committed by the Nazi army in East Germany during World War II. Ignorance, tension and contradictory emotions become evident in the responses of ex-soldiers, relatives of victims and even war survivors. That film, in a way, gave rise to Beckermann's latest great success at international level, The Waldheim Waltz (2018), winner of the Best Documentary Award at the 2018 Berlinale. This film is a reflection not only on the persistence of fascism in some European societies today, but also on the lies and "alternative facts" in political campaigns. The controversial case of Kurt Waldheim set off a revival of historical memory in Vienna, though it also in turn brought about a rise in shameless displays of anti-Semitism, something reflected upon more clearly and intimately in Homemad(e) (2001), with declarations on the victory of the far-right leader Jörg Haider.

Poetry, art, the truth and historical memory blend together in one of her most particular and unclassifiable films, The Dreamed Ones (2016). Playing with the limits between fiction and reality, Beckermann uses two actors to reconstruct the daring correspondence between the poets Paul Celan andIngeborg Bachmann, who lived out a stormy and impossible relationship from the postwar era.

A look at the world

Beckermann's films also always take viewers to different places in an exploration of their collective ways of life, customs and imaginations. In A Fleeting Passage to the Orient (1999), the Austrian filmmaker travels to Egypt to both recreate the journey made by the Bavarian Empress Sissi in the late 19th century and to show that cities still fail to be designed for the leisure of women.

In the recent American Passages (2011), Beckermann performs a thorough examination of the USA, from Harlem to Las Vegas, from Christian campuses to gay parents adopting a child. Perhaps her most international film is Those Who Go, Those Who Stay (2013), in which testimonies and stories from Paris, Vienna, Sicily and Alexandria get interconnected by fate.