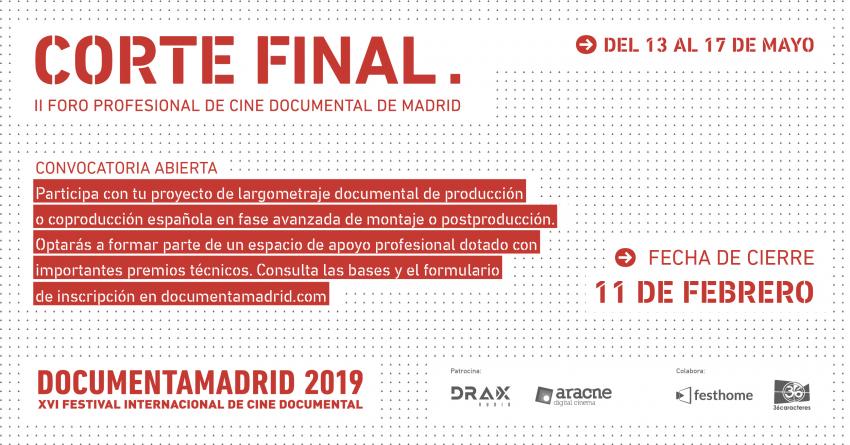 DocumentaMadrid opens its call for entries to the 2nd CORTE FINAL Professional Forum, which lends support to independent documentary film productions that are markedly auteur in nature and in an advanced phase of editing or post-production. Up until February 11, filmmakers may submit projects to take part in this space for professionals to give advice and reflection under the auspices of the film producer and expert in documentary development, Marta Andreu. Promoted by the Madrid City Council, the 16th International Documentary Film Festival will be held from May 9th to 19th, 2019.

The Festival holds this forum in order to delve deeper into the creative, technical, production and distribution aspects of the film through active participation of other filmmakers and audiovisual professionals. For the directors of the festival, Andrea Guzmán and David Varela, CORTE FINAL is a high-priority cornerstone this year, one that meets a critical need for Spanish documentary filmmaking: "we believe Spanish cinema has enormous creative potential deserving of support. In other countries, projects which are markedly auteur in character find it easier to connect with producers willing to take on the risk of producing a film with these characteristics, and initiatives such as these are one necessary boost".

The projects selected will also compete for the CORTE FINAL Award,  sponsored by major companies in the audiovisual sector. The company Aracne DC will be the lead collaborator on the post-production phase of the winning film, with services worth €7,500, while for the sound post-production, the company DRAX audio will be providing services at its studio worth €7,000. Rubén Carregal, Associate and Technical Director of DRAX audio explains:  "From the beginning, we have had a strong bond with documentary film. We always insist that 50% of any audiovisual work is the sound, and that no production should be lacking in high-quality sound postproduction, which is why we are excited about helping the winning project to achieve it".

In addition to the sound and the image, the winning project of the CORTE FINAL Award will also get aide in its distribution phase, thanks to collaboration from the subtitling company 36caracteres and the distribution platform Festhome. For the second year, these companies will be helping the project selected in the Professional Forum to get completed under the best possible technical conditions.

Until February 11, any interested filmmakers can submit their documentary project at the festival website free of charge (rules and regulations available at this link). Spanish productions or co-productions shall be accepted, as will projects whose directors are Spanish nationals, even if they do not have a production company in the national territory.

Space for reflection and advice

The producer and expert in documentary film development Marta Andreu, who served on the forum's selection committee and led the inaugural workshop at the first edition, tells of the great usefulness and originality of spaces like CORTE FINAL: "From the day one, it was clear that this was going to be a success; a true meeting place. Over the course of working and reflecting, the dialogues and exchanges were incredibly honesty and generous; everyone gave their opinion with the utmost respect, carefully selecting the words for speaking about the other people’s project".

The winner of the CORTE FINAL Award, Isabella Lima, comments on how valuable the professional meeting was to her film Mercedes: "The greatest award for me was the chance to share impressions, weaknesses and doubts with other artists and with our project tutors in an intimate, caring and familiar environment". For their part, the filmmakers of El cuarto reino, Adán Aliaga and Àlex Lora, recall their experience at CORTE FINAL: "It was very enriching and brought many new ideas to the project, both from the professionals in attendance and from the other directors and producers taking part".

"CORTE FINAL was a key turning point for our project. It was an opportunity to truly further not just our work, but also the works-in-progress of all those participating, by devoting the necessary time and sharing reflections with some truly extraordinary consultants", comments Ainhoa Andraka, producer of the film Meseta by Juan Palacios.

Nuria Giménez, winner of the Special Mention of the Jury for her project My Mexican Bretzel, explains what a leap forward participating in last year's CORTE FINAL meant for her film: "It was an absolute luxury to be able to listen to these three experts, as well as the other professionals attending the various sessions. In my case, it was also the first time I had showed what I had done and all the comments I received were enormously useful. In short, CORTE FINAL marked a before-and-after for my project, for my career and for me personally."

The 2nd CORTE FINAL Professional Forum will be carried over the course of three straight days at Cineteca Madrid, making it possible to hold fruitful dialogue in a collaborative setting open to the professional public in the mornings and privately in the evenings. Every day will be structured as follows: in the mornings, one or two works-in-progress will be screened and their directors will get the chance to present it to the audience and receive advice; in the evenings, the filmmakers will have individual meetings with the advisors to discuss their projects.

At last year's edition, the selection committee was made up of Marta Andreu and Lola Mayo, and the jury members were Luciano Barisone, Isabela Monteiro de Castro and Carlos Esbert. The winning project of the CORTE FINAL Award was Mercedes by Isabella Lima and the Special Mention of the Jury went to My Mexican Bretzel by Nuria Giménez.

The deadline for submitting projects will be February 11, and the rules and regulations for this call for entries can be viewed here. Spanish film productions or co-productions, or those directed by filmmakers of Spanish nationality, currently in an advanced phase of editing and whose filming already been completed or is a very advanced stage, and which have a rough-cut lasting between 50 and 120 minutes. The selection committee will be made up of experts and professionals in the film industry, who will be responsible for viewing and assessing all the films received and will decide which films are to participate in the 2nd CORTE FINAL Professional Forum.

Film submission is completely free of charge and can be done exclusively online on the official festival website. Any questions regarding the interpretation of the rules or film submission process should be addressed to the festival team at info@documentamadrid.com.

The DocumentaMadrid Festival is dedicated to the multi-faceted expressions of documentary film, as well as to finding and presenting new film languages ​​and expressions in the genre. Last year's edition drew over 14,500 audience members to the various partnering venues: Cineteca Madrid, Filmoteca Española, Casa de América, Institut Français, Sala Equis and the Casa del Reloj.