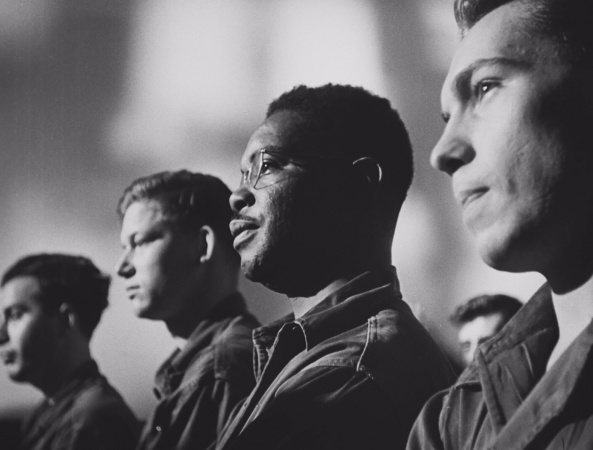 DocumentaMadrid and Complutense University of Madrid are launching a new collaboration between the academic world and the International Documentary Film Festival with the aim of fostering debate, reflection and audiovisual creation among the student body. For the first time, the two institutions are publicly inviting the university community to share their own audiovisual reflections on one issue and a series of ethical and aesthetic approaches that DocumentaMadrid will be covering in its next edition between May 9 and 19: the aftermath of war, which the festival program will be addressing in depth.

"In the film series War Scenarios, we will be looking at the profound consequences that persist in individuals, societies and spaces after wars end, and how the impact of that violence might be analyzed, combatted and counterbalanced from a variety of devices, which has cinema as one of its maximum creative exponents", explains David Varela, co-director of the DocumentaMadrid Festival. "We want to open up a dialogue with university students, encourage creativity and critical thinking when viewing images, and we hope over the next few months students will feel encouraged to do some research on this subject matter; we hope to be surprised by their different perspectives", adds Andrea Guzmán, co-director of DocumentaMadrid.

Having already been an official venue for the festival in its early editions up until 2012, the Círculo de Bellas Artes will be so once again for the 16th DocumentaMadrid Festival, hosting the War Scenarios film series in its entirety. As film curator at Cine Estudio and a member of the International Jury at last year’s festival, Manuel Asín pointed out the importance of the collaboration: "we are overjoyed to once again be an official venue of a festival that is so relevant to the city of Madrid because we share DocumentaMadrid’s drive for finding new means of expression, its purpose of getting back to cinema’s nature as a space of wonderment, of discovery, a living place where the public can take part and meet their fellow spectators and filmmakers".

As part of this series, the Cine Estudio at the Círculo de Bellas Artes will be showing classics from May 9 through 19, including John Huston’s Let There Be Light  (USA, 1946) -a stark and optimistic portrait that was banned for over 35 years by the same US army that produced it-, as well as the more recent Still Recording  (Syria, 2018) by Syrian directors Guiath Ayoub and Saeed Al Batal, which gives an account of the urgent need for capturing horror on film and which won the Audience Award at the Venice Film Festival. Also on the program, Sbrenka  (Croatia, 2018), a film directed by Nebojša Slijepčević , which deals with the importance of re-enacting a conflict as a way of coping with trauma from the past. This film won the DAS (Doc Alliance Selection) Award at its most recent edition, a prestigious award promoted by seven major European film festivals, including Doclisboa, FIDMarseille and Visions du Réel.

Call for entries to the academic world

Students from Complutense University will get the chance to submit entries to the War Scenarios competition by sending in their audiovisual works, whose run-time should be under five minutes (link to the rules and regulations). In addition, students from the Department of Information Sciences will be getting guidance and tutelage from a large group of professors who have already announced they will be including the competition in their mandatory class work. "It is a unique opportunity to open up a space for creativity and academic knowledge in conjunction with the content of the DocumentaMadrid Festival, where inter-generational and multidisciplinary dialogue is fostered, through which students get the opportunity to express their ideas on socially relevant and human issues, in my opinion part of the University’s core mission", says José Antonio Jiménez de las Heras, the Director of the Department’s research center, the Centro de Asistencia a la Investigación (CAI) de Creación de Contenidos Audiovisuales y Digitales.

To aid students in their research for this series, the online platform for cinema and series Filmin will also be joining in on this initiative, through the creation of a special film collection on armed conflicts, which includes such work as The Missing Picture (Rithy Panh, 2013), Escoréu, 24 d'avientu de 1937  (Ramón Lluís Bande, 2017) and Waltz with Bashir (Ari Folman, 2008), which can be seen on the platform’s DocumentaMadrid channel (filmin.es/canal/documentamadrid).

Complutense University of Madrid’s Information Science Department will become an official venue for the DocumentaMadrid Festival for the first time ever.  Some of the films from the War Scenarios Film series  are to be screened at the Department’s Assembly Hall on May 13, 14, 16 and 17. Also to be announced and screened during these sessions, the audiovisual work sent in by students that have been rated the best by a selection committee made up of faculty members, including José Antonio J. de las Heras, Maria Antonia Paz, Mar Marcos, Ricardo Jimeno, Juan Crego, Luis Deltell, Cristina Manzano, and others, as well as representatives of the DocumentaMadrid Festival.