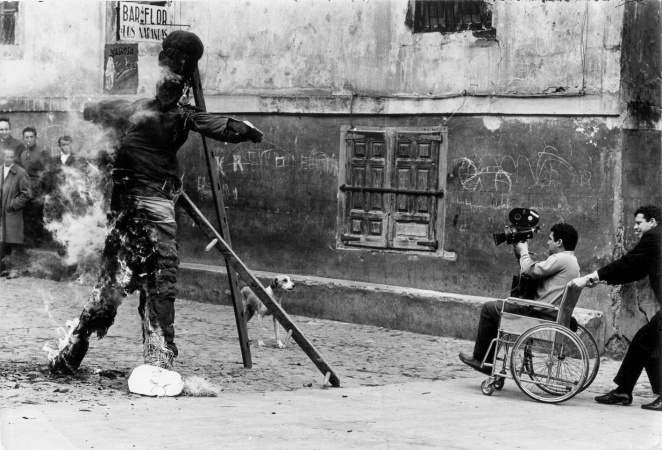 Once again this year, DocumentaMadrid and the Casa de América have put together a film series bridging the gap between Spain and Latin America through documentary films. "Signed Mirrors" stems from the question: what would happen if we chose one uncomfortable title from Spanish film history, such as Far from the trees  by Jacinto Esteva (1972), and offered it as an open letter to a group of filmmakers, critics and programmers in Latin America?

The response was a multilateral correspondence, in which each recipient proposed films of their own nationality to create a film map to be used to create a thread of invisible union across the two continents. The authors of this correspondence are Cecilia Barrionuevo and Marcelo Alderete (Argentina), Elena Fortes (Mexico), Eduardo Escorel (Brazil), Diana Bustamante (Colombia), Fernando Vílchez (Peru) and Luciano Castillo (Cuba), who have curated this series in collaboration with the filmmaker José Luis Torres Leiva (Chile).

DocumentaMadrid offers this series as a way of looking at the collective from the singularity of each of the invited filmographies, to thereby produce images that are refracting, subtle and lucid, where the films amplify and revise meanings through dialogue and interaction", says David Varela, co-director of DocumentaMadrid.

A film map for crossing the Atlantic

Music, anthropology, conflicts between tradition and modernity, memory and surrealism are some of the themes running throughout the series. From May 9th to the 19th, DocumentaMadrid is offering the chance to discover or revisit films for the most part unreleased in Spain, to take us to our roots through "a cinema that looks at itself in the fascinated reflection of a culture that survives (though not always), in spite of itself", in the words of the directors of the festival, Andrea Guzmán and David Varela.

The source work for the series, Lejos de los árboles (1972), might be thought of as an anti-tourism journey through Spain's wild popular festivities. Censured in its day by the Franco regime, Jacinto Esteva made a film that is overtly Spanish, yet one with great potential for generating an aesthetic and creative debate with the film work from the other side of the Atlantic.

Cuba's response to Esteva's film turns out to be a hallmark of Cuban musical film, a voluptuous and vibrant work entitled Nosotros, la música (1964) by Rogelio París. "At times, it conveys the sensation of being dragged to a dance and even to smell the sweat of those swept into a comparsa", comments the critic Luciano Castillo, who suggested this film for the exhibit. The footage is a faithful reflection of the music scene in the sixties, with appearances by such famous figures as Bola de Nieve and Celeste Mendoza.

From Colombia, the film proposed by Diana Bustamante (Colombia) is Crónica de un baile de muñeco (2003) by Pablo Mora. This film goes beyond just the ethnographic record and "provides an account of the various levels of interpretation of tradition and, in particular, of two that come into confrontation with each other and find points of dialogue: for the Westerner, that of capturing and storing memories, for the indigenous, to do without them. The ritual of the Yucuna community is explored, a representation of men and animals for the sacred understanding of their lives.

Also to be shown at the Casa de América will be Ciudad de María (2001) by Enrique Bellande, "one of the most widely-cited and significant films in New Argentine Film, a movement that emerged in the late '90s to refresh that country's filmmaking", according to Cecilia Barrionuevo and Marcelo Alderete, who selected this film for "Signed Mirrors". The city referred to in the title is San Nicolás, which became a center of religious activity after the closure of a steel company and several alleged apparitions of the Virgin Mary beginning in 1983. The result is a subtle and revealing sociological portrait of a community in search of its economic miracle.

A similar story is depicted in A punto de despegar (2015) by Lorena Best and Robinson Diaz: a Peruvian town called San Agustín is forced to evict its inhabitants for an airport expansion project. With this event comes the end of this community's various traditions and ways of life. "A film built up over a decade of friendship with the residents. A farewell radiating affection, intimacy and unease in equal measure," says Fernando Vílchez, who has chosen this film for this series.

From Mexico comes La fórmula secreta (1965) by Rubén Gámez, a work of surreal and clairvoyant metaphors, along with a poem by Juan Rulfo, in a Mexico struggling to withstand the attacks of neo-capitalism. It is an essay film that contains footage alluding to the construction of Mexican identity through its contradictions, symbols, and the complicated relationship with its neighboring country", according to the producer and programmer Elena Fortes. "Gámez's work steered Mexican cinema into a new direction, a legacy which remains relevant today," she adds.

In Aboio (2005), Marília Rocha breaks with the aesthetic tradition of visual anthropology to show how another tradition -in this case that of an ancient and singular way of pasturing in the Sertón region of Brazil- vanishes right before our eyes "Aboio is most surprising for its tone of dreamlike lament," says Brazilian filmmaker Eduardo Escorel.