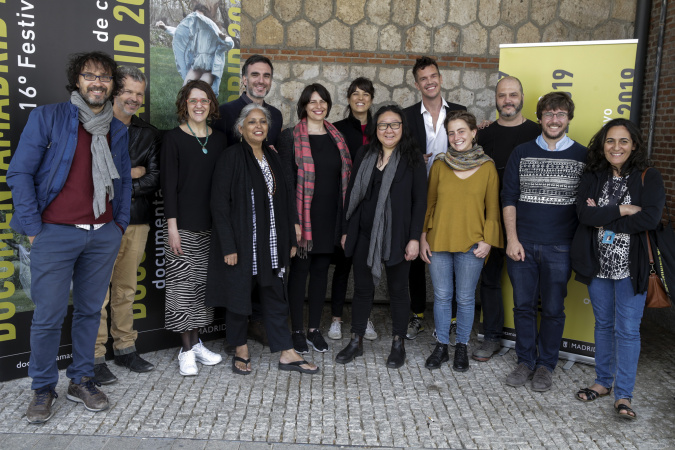 This morning at the Plató Room in the Cineteca Madrid, over twenty filmmakers competing at the 16th DocumentaMadrid eagerly awaited the reading of the awards list by Andrea Guzmán, the Festival co-director, accompanied by Elías León Siminiani on behalf of the jury of the International Competitive Section and Noemí García as a jury member of the International Fugas Section.

The Jury Award for the National Feature Film Section, worth 10,000 euros, has gone to The Fourth Kingdom, a film directed by Àlex Lora and Adán Aliaga, "for developing a careful and meticulous portrait of a very particular world that dignifies the characters inhabiting it, in a story that is both political and fantastic in equal measure", explained Andrea Guzmán on behalf of the jury made up of the Austrian-born filmmaker and producer Günter Schwaiger, the filmmaker and professor specializing in expanded cinema Jorge Caballero, and Sesi Bergeret, a film programmer for the l'Alternativa Independent Film Festival of Barcelona.

The same National Competition jury gave a Special Mention ex aequo to the feature films Una corriente salvaje by Nuria Ibáñez "for portraying the relationship between two men and the ability to show that intimate bond with simplicity and elegance". In the case of Para la guerra by Francisco Marise, the jury praised "its accurate exploration of film language, enveloping a story of delirium and resistance".

In the National Short Film Section, the Jury Award worth 5,000 euros has gone to Greykey by Enric Ribes "for its convincing and meticulous handling of the family archive, not only because its ethical anti-racist background is moving, but also because in these convulsive times, it is also necessary",  the jury stated.

lso recognized with a Special Mention was the film Ancora Lucciole by María Elorza "for the film's ability to develop a free, revealing and poetic playfulness based on a powerfully political text, while also making room for the family and historical memory".