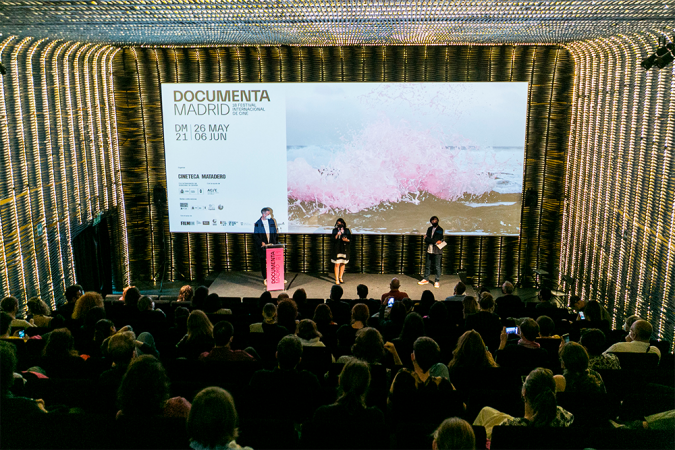 More than 37.000 people have enjoyed the 18th edition of the International Film Festival Documenta Madrid, organized by the Cultural Area of the City Council of Madrid. The in-person activities of the festival have gathered 2.032 people, nearly doubling the past edition, while the digital version of the festival has gathered 35.197 spectators, surpassing the audience of 2020.

Documenta Madrid 2021 has screened 110 films from 24 nationalities, 29 have been Spanish releases and 8 global releases. In an edition focused on contemporary cinema with a special interest on the new aesthetic proposals that has combined the works of renowned filmmakers with surprising debuts, the festival has offered an on-site programming in Cineteca Madrid, as the main venue, as well as in three collaborating venues: Museo Reina Sofía, Filmoteca Española and Círculo de Bellas Artes. Again, this year the online programming has been offered through the VOD platform Filmin and with meetings and excusive contents in the Festival’s YouTube channel.

Gonzalo de Pedro, artistic director of Cineteca Madrid, states “Documenta Madrid, that has organised two editions in six months, consolidates as an open space for all forms of the most luminous and free cinema. In this edition, it has also proved that it is a young festival looking forward for the future”.

The artistic curators Cecilia Barrionuevo and James Lattimer state that “the festival has reached the legal age opening a space for the cinema of the real and all its ramifications, first in Madrid, and for the whole country, through online screenings. Born as a festival specialised in documentaries, from its origins it had the seeds of an open, free, and luminous cinema. Documenta Madrid, that has raised the stakes for cinema beyond form, definition, genre, or length, has screened many, hundreds, thousands of films, filmmakers, guests, juries, directors, and it is now in its 18th edition that it looks behind and embraces them all. Documenta Madrid is a film festival and thus we like to present it”.

After the official finishing date of the Festival, it is still possible to enjoy the programming of Documenta Madrid until June 14th in Museo Reina Sofía with the retrospective ‘Luke Fowler: a certain predilection for uncommon things’. Also, in the frame of the exhibition ‘Contra la raza’, the audience can see ‘We all like plantain’ by Rubén H. Bermúdez in Nave 0 of Matadero Madrid, the Best National Film Award of this edition.

24 competing films, 4 projects in Final Cut and more than 100 screenings
The selected competing films in all sections have competed in equal conditions and with the same prizes, no matter the length of the works. The audience has enjoyed in-person the films belonging to the National Competition and both in-person and online the titles belonging to the International competition, as well as some of the films of the new section ‘Back and Forth’, that has featured new works, retrospectives, and restored works of classic or unknown films from renowned filmmakers. The Final Cut Section has also featured screenings reserved to professional guests.

Despite the difficulties of the current pandemic situation, this 18th edition has hosted diverse directors coming to Madrid to present their works. In the National Competition there were talks with Elena Duque (‘Private collection’), Claudia Negro García (‘The Algorithm Movie’), Alfonso Camacho (‘Ōra marītĭma’), Inés García Gómez (‘Winterreise’), Jaume Claret (‘Her and I’), Alex Reynolds & Alma Söderberg (‘The Hand That Sings’), Clara Rus (‘Our Years’), Rubén H. Bermúdez (‘We all like plantain’), Jamie Weiss (‘A minor figure’), León Siminiani (‘Stillness Syndrome’) and the team of ‘Autopsy of a Journalistic Story’, Elisa G. Carrasco, Paulina Quiroz Navarro, Alex Ruggeri Buera, Júlia Sainz and Alejandro Dueñas. In the frame of the International Competition there were talks with Yuyan Wang (‘One Thousand And One Attempts To Be An Ocean’), Nataliya Ilchuk (‘Sensitive Material’) and the producer of ‘Abyssal’, Boris Prieto.

The attendees of the Festival’s opening could enjoy ‘Patrick’, the most recent work of Luke Fowler, and a performative conference of the musician Jorge Socarrás. ‘Camino incierto’ was the closing film of this edition, with the presentation of its director Pau (Pablo) García Pérez de Lara and Lluís Miñarro.

Most of the jury members were also present in the Festival. In the competitive National section Rebecca de Pas, Javier Fernández Vázquez, and Elena Gorfinkel; in the international competitive section Sofia Bohdanowicz, Chema González and Zsuzsanna Kiràly; last, Maria Bonsanti and Virginia García del Pino, were in charge of evaluating the selected projects in Fina Cut, devoted to Spanish films in the final stage of production or co-production.

ON Documenta
For another year On Documenta has organised meetings with the participants of the festival, that talked with the curators and programmers  through Documenta Madrid’s YouTube channel to share the ideas and obstacles that shaped their film projects. Some of the participants were Luke Fowler, Luis Ospina, Lourdes Portillo, Luis Miñarro, Pablo García Pérez de Lara, Manuela de Laborde and Jim Finn, among others.

In the Final Cut section, devoted to Spanish films in the final stage of production or co-production, the prize of 4.000 € has been awarded to ‘La mala familia’ by Nacho y Luis BRBR. ‘We all like plantain’ by Rubén H. Bermúdez also received the CineZeta Award to the Best National Film, awarded by the young programmers of CineZeta in Cineteca Madrid.