The International Film Festival's 17th edition, promoted by the Madrid City Council, will be held from December 9 to 20 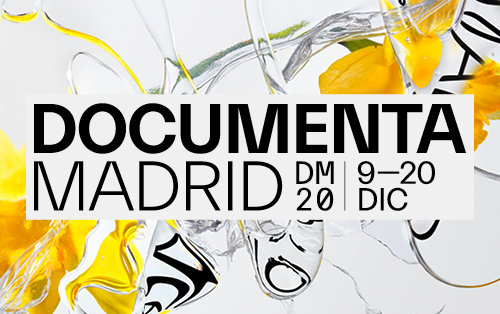 Documenta Madrid, the International Film Festival promoted by the Madrid City Council, is to be held between the 9th and 20th of December 2020 at various cultural venues throughout the city, such as Cineteca Madrid, the festival's main venue; Matadero Madrid, the Spanish Film Archives and the Reina Sofía Museum. In addition, part of its programming will for the first time be screened on the VOD platform Filmin, an online venue, so everyone across Spain can enjoy the films the Festival's 17th edition has to offer.

Documenta Madrid is adapting to the new circumstances and, while on the one hand reclaiming theaters as safe places to meet up and enjoy cinema and culture, it is also expanding its programming online. This change is accompanied by a refreshed image and new graphics reflecting the festival's purpose of serving as a showcase for a highly varied contemporary and international cinema rooted in the avant-garde and the diverse forms of non-fiction.

“We are opening Documenta Madrid up to a broader idea of modern-day cinema, given that the real is always a construction, one with an intention, a point of view, a vision and a mis-en-scene. A rich and diverse cinema that we believe can be enjoyed in cinemas as well as online, thus broadening the range of audiences”, explains Gonzalo de Pedro, artistic director of Cineteca Madrid, a space belonging to the City of Madrid's Area of Culture, Tourism and Sports and managed by Madrid Destino, who is in charge of organizing the 17th International Film Festival.

Documenta Madrid will feature two guest artistic curators for the first time: Cecilia Barrionuevo -artistic director of the Mar del Plata International Film Festival-, and James Lattimer -film programmer of the Berlinale Forum-, who have joined the team to provide their perspectives as leading international film programmers on the contemporary film festival circuit.

The festival will be held between December 9 and 20 in a hybrid format, with most of the screenings concentrated in theaters until December 13, and until the 20th on Filmin, with the exception of the screenings in the Spanish Film Archives which will extend through the month of December. Most of the films in competition may be enjoyed both in the living room and online, and the festival will also offer audiences exclusive screenings both in theaters and online.

Health conditions permitting, the screenings of the national competition will take place exclusively in theaters, as a way of both reclaiming cinemas as safe spaces and promoting encounters and dialogue between the community of filmmakers and their audience. Likewise, the Fugas competitive section, which is dedicated to the most open forms of contemporary cinema, can be enjoyed exclusively on Filmin.

In the words of the artistic curators, Barrionuevo and Lattimer, “during these months, together with the wonderful team of Documenta Madrid, we have continued working to offer the best possible festival, adapting to the circumstances to offer a safe space where audiences and films can come together. Like on our posters, we want Documenta Madrid to blossom as we close out the year, and for cinema to help us understand the complex world we live in, while also serving as a place to take shelter together; we want to bid farewell to 2020 with flowers, light and films”.

The opening session will take place in the Azcona room at the Cineteca Madrid on December 9, and the awards ceremony will take place on Sunday the 13th in the same room.

In this 17th edition of the festival, the films selected to all sections in competition will, for the first time, compete under equal conditions and for equal awards, regardless film duration. "It seemed important to us for the festival to bolster its support for creative freedom, with no distinctions nor classifications in terms of film duration," say the artistic curators.

On Sunday, December 13, the list of winners will be announced and the awards handed out to the winners of the 17th edition of Documenta Madrid. Most of the award-winning films can be enjoyed on Filmin until the 20th, thus providing the public more opportunities to discover this year's award-winning films.

Announcement of the films in competition

Some of this year’s most celebrated films will be making their premiere in Madrid as part of Documenta Madrid, such as 'Anunciaron tormenta' by Javier Fernández Vázquez, presented in the Forum section at the most recent Berlin Festival, and which will be making its national premiere at Documenta Madrid, as well as 'A media voz', by Heidi Hassan and Patricia Pérez, winner of the award for best documentary at the Amsterdam Documentary Festival (IDFA).

The festival will also be presenting new films by renowned international filmmakers: ‘Mi piel luminosa’ by Nicolás Pereda, directed along with Gabino Rodríguez; ‘Point And Line To Plane’, by Sofia Bohdanowicz; ‘The Last City’, by Heinz Emigholz; ‘Responsabilidad Empresarial’, by Jonathan Perel; ‘Explaining The Law To Kwame’, by Roee Rosen; ‘Como el cielo después de llover’, by Mercedes Gaviria; and ‘Look Then Below’, by  Ben Rivers. The complete selection of the competitive sections will be announced shortly.

The series of images on the poster for the 17th Documenta Madrid are the work of the young photographer and visual artist Geray Mena (Medina del Campo, Valladolid, 1989), acclaimed for his artistic creations combining a hybrid narrative with a refined aesthetic, that, according to critics, requires viewers to look attentively and precisely. His work has been exhibited at CentroCentro in Madrid, SBK Galerie and WOW in Amsterdam, among others; and he has collaborated with brands and publications such as Apple, El Corte Inglés, El País and GQ.

This year's image shows the duality between the natural and the artificial, flowers and plastics, in a metaphor of the human condition and sustainability, and of filmmaking itself.