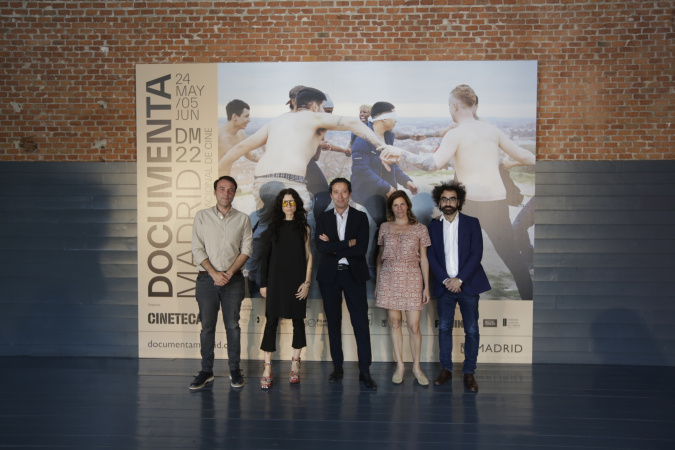 Documenta Madrid, the International Film Festival organized by the Culture, Tourism and Sport Area of the Madrid City Council, has presented this morning in the Sala Azcona of Cineteca Madrid the program of its 19th edition. The event was attended by Jorge Moreta, coordinator of the Culture Area of the Madrid City Council; Luis E. Parés, artistic director of Cineteca Madrid; the guest artistic curators of this edition Mariana Barassi and Diego Rodríguez; as well as representatives of the venues and collaborating institutions.

Documenta Madrid 2022 will take place in person between May 24 and 29 at Cineteca Madrid, as main venue, Museo Reina Sofía and Filmoteca Española, and from May 30 to June 5 online through Filmin. The festival's artistic curators, Mariana Barassi and Diego Rodriguez, have pointed out that in this edition "Documenta Madrid 2022 seeks, above all, contact with the public, with the city, with contemporary creation. The collective experience (the skin, the touch, the look) that finally defines life, turns the relationship between one and the other into the real engine that we want to transfer to the audiovisual. Therefore, this edition will be an impulse towards the collective audiovisual experience, understood as an active exhibition of essential dialogue between the spectator and the creation. The festival wants to cross the screens, open and extend its programming to all the people of Madrid, as well as to all film lovers who, year after year, remain faithful to this event. To this end, it will seek to explore new ways of watching films to encourage an accomplice and active, critical look at what we do, what we see, what happens around us.

Luis E. Parés, artistic director of Cineteca Madrid, said that "this year, the festival is held in sad times, the world news is presented as an agitated scenario, where barbarism and unreason make their way and generate more questions than answers about ourselves, as a community, as an ecosystem. We believe that documentaries have the capacity to question the present and generate spaces for collective reflection. Now more than ever we need to bring the documentary genre to the forefront as a mediating agent and creator of thought, and turn meeting spaces into forums for coexistence, creation and peace".

24 titles will compete in the Official Section and four projects will be part of the Final Cut
Local and close stories, tributes and family testimonies, political essays or autobiographical stories are some of the themes around which revolve the 24 films participating in the International and National competitions of Documenta Madrid, being 12 of them productions signed by female names and 12 by male names.

The 12 titles that make up the International Competition will be Rewind & Play by Alain Gomis, a film that collects previously unpublished excerpts from a 1969 interview with the legendary jazz pianist and composer Thelonius Monk, How Do You Measure a Year? by Jay Rosenblatt, All About My Sisters by Wang Qiong, Un usage de la mer by Fabrizio Polpettini, Abrir Monte by María Rojas Arias, Luminum by Maximiliano Schonfeld, We Love Life by Hana Vojáčková, Malintzin 17 by Mara Polgovsky and Eugenio Polgovsky and When There Is No More Music to Write, and Other Roman Stories by Éric Baudelaire, all of them premieres in Spain. Completing the International Competition will be Nazarbi by Maryam Tafakory, Nuclear Family by Travis Wilkerson and Erin Wilkerson and A Human Certainty by Morgan Quaintance.

Retrospectives and special screenings
From May 23 to June 25 the public will be able to enjoy the cycle Dejen de prohibir que no alcanzo a desobedecer todo that Documenta Madrid and the Reina Sofía Museum are dedicating to the films of Gonzalo García-Pelayo. Among the 13 films that make up the retrospective are Manuela, Vivir en Sevilla, Frente al mar, Corridas de alegría and Rocío y José by García-Pelayo, which will dialogue with the work of young contemporary filmmakers and artists who are situated in the field of contemporary counterculture such as Juana Dolores, Marta Valverde, Ian de la Rosa, José Luis Tirado, Ignacio G. Merlo, Concha Barquero and Alejandro Alvarado.

From May 24 to 29 and on the occasion of the centenary of the birth of Jonas Mekas in December 1922, Documenta Madrid and Filmoteca Española join the worldwide initiative to commemorate this absolute reference of non-fiction cinema with the retrospective Jonas Mekas. Flashes of Life. A cycle that seeks to rediscover and publicize the cinematographic work of the creator while collectives and filmmakers dialogue and debate with his work, creating something alive that transcends the movie theater and floods the street. Six films by Mekas such as Birth of a Nation, Lost Lost Lost or Reminiscencias de un viaje a Lituania interact with the work of contemporary creators influenced by his work such as Orquestina de Pigmeos, Meritxell Colell, Efrén Cuevas or Nuberu Bagu.

The awards ceremony of the 19th edition of Documenta Madrid will take place on Sunday May 30 at 20:00h at Cineteca Madrid. The announcement of the award-winning films will be followed by the screening of the musical episode Terminal Norte, by the great Latin American filmmaker Lucrecia Martel, followed by a performance by the artist Verde Prato. A dialogue between two women who delve into their musical traditions to find a strong and unbribable identity through a two-way journey, from sisterhood to joy, from music to identity.

Filmin: Perspectives and Focus Inside Cinema Sections
The online aspect of Documenta Madrid will be inaugurated on Filmin on May 30 and will run until June 5 with the screening of 13 films exclusively. The Perspectives section will be nourished by some of the best creations of 2021, which for their quality and valuable interest deserve to be seen, admired and recognized in this 19th edition of the festival.  A virxe roxa by Marcos Nine, Bienvenido Mr. Banksy by Carlos A. Quirós, D'ombres by Joan Tisminetzky, Cantando en las azoteas by Enric Ribes Reig, Margarita Ledo. Parolar cun eu by Xisela Franco Costas, Et pourtant elles étaient là by Carolina Astudillo Muñoz, José Nicolás, Lucien Petitjean and Marta Álvarez, El búnker by Marcos García, At one point they were the same person by Victoria Oliver Farner, and A cinquito, con derecho a tocar by Quiela Nuc and Andrea Beade, are the nine films that make up this section.

El Foco Dentro Cine is a trilogy of feature films in which fragments of the lives of a series of characters intertwine to form a complex and radiant puzzle. Cinema made by teenagers and young people at risk of social exclusion who film and interpret their experiences, crossing the limits of cinematographic representation. On Filmin you will be able to see Amor sin ciudad (2020), Las edades sensibles a la luz (2019) the recent Qué planeta reinaría (2022), three films made within the framework of the Escuela Dentro Cine de Cine de Cineteca and Matadero Madrid, an artistic and therapeutic project directed by Pedro Sara and Violeta Pagán.

New section Vaya Panorama
New this year is Vaya Panorama, a section that opens a window to the most daring creations and supports a new way of being in theaters and interacting with the viewer's gaze. A space for thinking about the viewing experience and the processes of audiovisual creation aimed at promoting new ways of production, realization and exhibition, always from a collective point of view. Vaya Panorama invites artists, creative collectives and programmers who incorporate porosity, trial and error into their processes, placing the search and the unfinished at the center of their proposals. The four selected projects are San Simón 62, by Irati Gorostidi, Mirari Echávarri, winner of X Films 2021 at the Punto de Vista festival; Esto, by Terrorismo de Autor; Qué planeta reinaría by Dentro Cine; and Errores, tecno, espectros, by mediadistancia together with Blanca Velasco and Abel Hernández El hijo.

Documenta Madrid Dialogue Forum: Present and Future of Documentary Film in Spain
Also for the first time, Documenta Madrid presents a professional forum on the current state of documentary filmmaking. The first Documenta Madrid Dialogue Forum: Present and Future of Documentary Film in Spain will take place on Friday, May 27. Among the topics to be analyzed are the causes that prevent a sustainable growth of the documentary genre and, above all, the search for solutions for a more robust circulation of this type of works that will bring us closer to our European environment. In this way, Documenta Madrid is configured as a space where creators, producers, distributors, exhibitors, VOD platforms, associations and other industry agents can dialogue under three fundamental axes: Creation and Production, Cinemas and Platforms, and Distribution, International Sales and Festivals. Its main objective will be to turn Documenta Madrid into a space where the different industry agents can talk and work towards the documentary genre, and the generation of a white book of recommendations for the different administrations in the 20th edition of Documenta Madrid.

Workshops and free master classes given by the ECAM
Documenta Madrid is allied with the ECAM, School of Cinematography and Audiovisual of the Community of Madrid to support the training and education of creators and professionals in the documentary industry. Three free activities will be developed by the great film school of Madrid with previous registration: Sound in non-fiction cinema. The case of The Year of Discovery, given by its sound engineers Jorge Alarcón and Alberto Carlassare; Economic Sustainability Workshop, given by José Alayón, founder and executive producer of El Viaje Films, and Jamie Weiss, in charge of international production; and Environmental Sustainability Workshop by Eduardo Vieitez and Yolanda Costas, from Crest.

For the second time, Documenta Madrid will have a youth jury composed of ten members of CineZeta, Cineteca's team of young programmers, who will be responsible for awarding the CineZeta Youth Award to the best film among those competing in the national section. The jury is made up of Noah Jeanne Benalal Levy, Irene Castro Rivas, Irati Cubero Azpiritxaga, Matías Gonzalo Rebolledo Rivera, Miguel Guindos López, Ana Jiménez Pita, Aitana Martínez Ortas, Bojana Ristic, Javier Rodríguez Fernández and Anxo Solián Lage.

More than 36,000 euros in cash prizes
The three sections this year add up to more than 36,000 euros in cash prizes. The International and National Competitive Sections each award three prizes: the Jury Prize for Best Film, endowed with 10,000 Euros for each section; the Fugas Prize, endowed with 5,000 Euros also for each section; and the Cineteca Madrid Audience Award, endowed with 1,000 Euros per section, the latter awarded by audience voting. The films selected for the Final Cut will be eligible for a cash prize of €4,000.

Sponsoring and collaborating entities
Documenta Madrid 2022 is organized by Cineteca Madrid with funding from the Government of Spain (ICAA). It has the Reina Sofía Museum and Filmoteca Española as collaborating venues; with the collaboration of ECAM and Madrid Film Office; and with the support of Filmin and Instituto Confucio de Madrid.