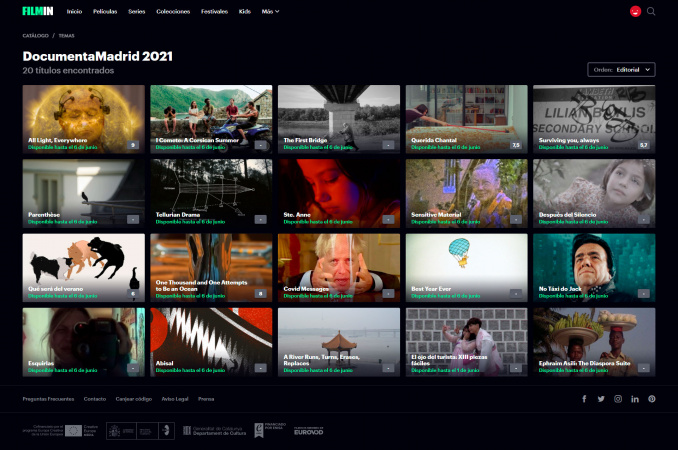 Documenta Madrid, the International Film Festival of the Cultural Area of the City Council of Madrid organised by Cineteca Madrid, reaches its halfway point. Over the course of this week, the festival’s audience will be able to continue enjoying a great part of the films of its 18th Edition.

On one hand, the VOD platform Filmin will be screening all the films in the International Competition, including the winners.

Some of the new festival’s informative section Back and Forth, that gather works, retrospectives and classic, historical, or unknown films restorations aiming to question what separates the historic of the contemporary with the idea of forging links between different filming and historiographic traditions all around the world, from the past to 2021, will also be available in Filmin. For subscribers and whoever interested, the Spanish release of the short film series by Ephraim Asili ‘The Diaspora Suite, ‘Después del silencio’ by María Alché, ‘Parenthèse’ by Fabrice Aragno, ‘Best Year Ever’ by James N. Kienitz Wilkins, ‘Querida Chantal’ by Nicolás Pereda, ‘The First Bridge’ by Laila Pakalnina, ‘Covid Messages’ by John Smith and the tribute screening of ‘Señorita extraviada’ by Lourdes Portillo in its 20th anniversary, will be available in the platform.

Cine Estudio in Círculo de Bellas Artes takes over the baton of Cineteca and hosts on June 4th and 5th the informative section Back and Forth with two focuses on the experimental authors Daïchi Saito and Manuela de Laborde under the title ‘Celuloide natural’ and ‘Abstracción rítmica’ respectively, with the Spanish releases of their most recent works. Thus, we will see the works ‘All That Rises’, ‘Trees of Syntax’, ‘Leaves of Axis’, ‘Engram of Returning’ and ‘earthearthearth’ by Daïchi Saito (Spanish release) and ‘As Without So Within’, ‘En la Era’, ‘Azúcar y saliva y vapor’ and ‘Ficciones’ by Manuela de Laborde (Spanish release).

On the other hand, Filmoteca Española continues until June 4th with the double retrospective ‘Djibril Diop Mambéty + Mati Diop: Different Versions of The Same Sun’, a dialogue between 14 films by the renowned Senegalese filmmaker, actor and poet Djibril Diop Mambéty and his niece, the French-Senegalese filmmaker and actress Mati Diop, that competed with her first feature film, ‘Atlantique’, in the official section of Cannes Festival winning the Great Jury Award.

18th International Film Festival Documenta Madrid
The International Film Festival lands again in Madrid and from Madrid to Spain on its online format, to para offer the best cinema from all over the world, focusing on contemporary cinema and specially on new aesthetic proposals, films that explore the new audio-visual forms no matter their definition, duration, genre, or category.

Documenta Madrid will release a total of 43 films from 23 different nationalities in its National and International competing sections. Some of them have been recently released in festivals like Sundance, Visions du Réel, Berlinale or Rotterdam and others will have their world premiere in Documenta Madrid.