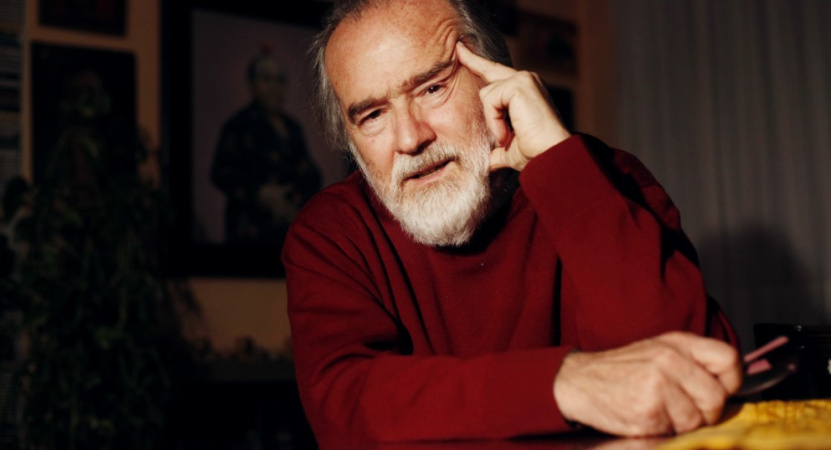 Gonzalo García-Pelayo will be the protagonist of a retrospective cycle at the Reina Sofía Museum, one of the collaborating venues of the 19th edition of Documenta Madrid, International Film Festival of the Madrid City Council. Organized in the framework of the collaboration initiated in 2019 between the two institutions, the cycle Stop Prohibiting, I Can't Disobey Everything. The cinema of Gonzalo García-Pelayo will present from May 23 to June 25 a journey through the films made between 1976 and 1986 by one of the fundamental cult auteurs of international cinema, rediscovered in recent years.

Filmmaker, night businessman, music producer, professional gambler, editor and speculator in the contemporary immaterial economy, Gonzalo García-Pelayo (Madrid, 1947) concentrates multiple lives in one. All these facets are summarized in a personal notion of cinema, understood as a form of existence based on vitalism, on desire without limits, on the happening as a narrative strategy and on the insubordination to everything that is predictable, whether on a formal or political level.

Works in the retrospective
Through his five historical feature films -Manuela (1975), Vivir en Sevilla (1978), Frente al mar (1979), Corridas de alegría (1982) and Rocío y José (1982)- García-Pelayo's retrospective is articulated in a program of six double sessions with screenings in which other contemporary artists and filmmakers participate, opening a transversal and intergenerational dialogue with García-Pelayo's work. The cycle is thus built from the enthusiasm that this author has awakened in a younger generation, which is reformulating another history of cinema in Spain.

Thus, the actress, writer and poet Juana Dolores Romero will celebrate the performance entitled "Miss Universe", accompanying the screening of Vivir en Sevilla, in a session entitled Sevilla, capital de la contracultura, a pesar de los pesares, which will also include the viewing of a series of recordings in digitized Super 8, of live musical performances of the mythical musical groups Smash and Gong, in the Dom Gonzalo hall in Seville, core of the counterculture that García-Pelayo founded in the late 60s.

The retrospective will be inaugurated on Monday, May 23rd at 7:00 pm with a master lecture on mathematics and chance by Gonzalo García-Pelayo, one day before the official start of Documenta Madrid and as a preamble to the festival.

The cinema of Gonzalo García-Pelayo
The work of Gonzalo García-Pelayo, a multifaceted creator in permanent rupture, whose filmic corpus is situated between fiction and the cinema of the real, is characterized by a declared subversive capacity, still in force today, and by the relation of filmic practice to ungovernable forms of life, whether in the youngest society or in marginal sectors.

The retrospective bears the same title as the first of the 11 contemporary films that the author has made entirely in 12 months between 2021 and 2022 (the year of the 11 films, in his words), in an unparalleled tour de force that demonstrates that cinema, before being an industry or a profession, is a way of life. These 11 films, with their making of, can be seen in September 2022. In turn, this title is the motto that best defines García-Pelayo's entire film corpus and best explains the fascination that the author has aroused among a young generation of filmmakers, artists and programmers, who have recovered his work as the foundation of a heterodox genealogy of cinema in Spain since the 1970s, but also as a model of confrontation in the face of an anesthetized society.

García-Pelayo's historical cinema, which is included in this cycle, is set in the changing and tumultuous society of the Spain of the Transition (1975-1986, between the death of Francisco Franco and the country's entry into the European Economic Community). A time in which the remnants of the political authoritarianism and moral conservatism of the dictatorship mingle with the strength of a thriving counterculture and the utopian yearning of the youth to build a new society, qualities that are present in García-Pelayo's films. With this framework in mind, the cycle dispenses with the traditional historicist or revisionist orientation and places the filmmaker in a contemporary dialogue in thematic sessions with young artists and filmmakers among whom his major themes reverberate. Namely: sex as free territory, social misfits and outcasts as lucid and honest antiheroes, the radical coexistence between the elevated and the popular, and music, be it flamenco, psychedelia or sevillanas, as an irruption of the real in fiction. Together with all this, the same spirit, that of transgressing the forms and limits of the well-thinking society, whether in 1975 or in 2022.

Documenta Madrid 2022 and Reina Sofia Museum
Documenta Madrid, the International Film Festival of the Area of Culture, Tourism and Sport of the Madrid City Council, aims to recover the collective audiovisual experience understood as an activity of essential dialogue between the viewer and the cinema. In its 19th edition, the festival will be curated by two prestigious international programmers, Mariana Barassi and Diego Rodríguez, under the direction of Cineteca Madrid, headed by Luis E. Parés. Interdisciplinary creation, in situ experience, training and development spaces will be the central themes of this edition of the festival. Since 2019, the Reina Sofía Museum and Documenta Madrid have been developing a collaboration that, curated by Chema González, has led to retrospectives in the field of film-essay, auteur cinema and experimental cinema of international prestige and repercussion.