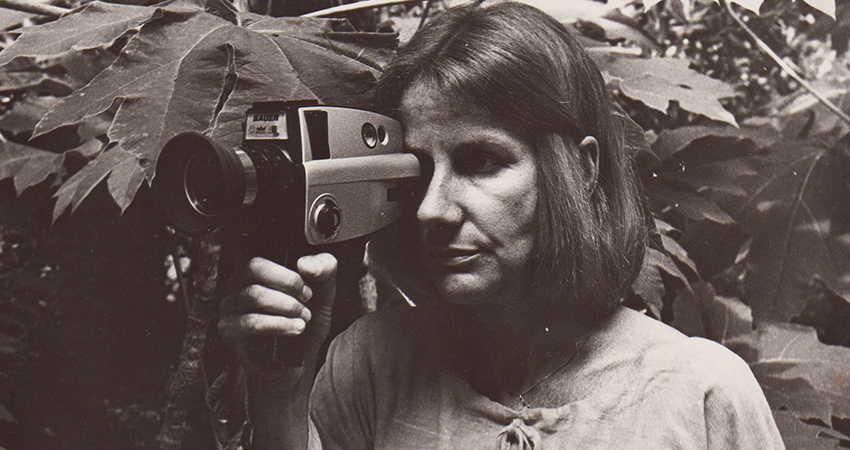 Narcisa Hirsch, a key figure in the history of Argentine and Latin American experimental film, will have a retrospective in the Museo Nacional Centro de Arte Reina Sofía, one of the venues of Documenta Madrid, the International Film Festival promoted by the City Council of Madrid. The retrospective will be conducted through three programs, gathering some of the essential film works of the pioneer filmmaker, such as ‘Manzanas’, ‘Testamento y vida interior’ or ‘Rumi’.

The retrospective will take place from December 11th to 13th in three thematic sessions in Museo Nacional Centro de Arte Reina Sofía. The retrospective includes installations, graffiti or performances created from the sixties and chosen for the occasion in collaboration with the filmmaker and the support of the ‘Filmoteca Narcisa Hirsch’, directed by Daniela Muttis and Tomas Rautenstrauch. Thus, this selection of works puts in the spotlight spiritual and existential questions such as love, birth, death, erotism and female power, considering the material nature of the body as an axis. In Narcisa Hirsch’s works, domestic landscapes of Buenos Aires and Patagonia, indoors and outdoors, work as an extension of an exploration that is at the same time formal and personal: the body, the eternal, the interior, the exterior, the motion, the still, the intimate and collective.

“The freedom of working with very little money is the freedom from having to sell, it is the freedom of working at home and by hand, without big crews or sets.  Nor any time constraints. One shot is taken per day, or one per year. Each one chooses their time and space. For that reason, and for everything else, experimental film is a subversive art, more so than documentary or political cinema. More subversive than intellectual or conceptual cinema. Which is why so few go into it, and even fewer stay”, declared Narcisa Hirsch.

Works in the retrospective

The retrospective will be divided into three programs that represent three different phases of Narcisa Hirsch’s cinema: the first one, with films like ‘Marabunta’, ‘Manzanas’ or ‘Retrato de una artista como ser humano’, gather her first incursions in cinema through the shooting of her performances and happenings in the streets. They are collective actions, shot in 8 or 16mm first, where the author and her collaborators directly question the audience. In these works, we can foresee the concerns Narcisa Hirsch would later develop in her purely filmic works: the relationship with nature or the mystery of birth and death.

The second program focuses on the relationship of Narcisa Hirsch’s cinema and Patagonia, a territory that is essential and dominant in her films as a natural meeting point of communion between the body and the eternal, a place for dialogue between the intimate and the immense. Films like ‘Rumi’ or ‘Patagonia 2’ explore these Argentinian landscapes and develop the relationship with the director and them.

Lastly, the third program of this retrospective will show Narcisa Hirsch’s works more associated with experimental cinema, with titles that go from the structural to the more sensorial or poetic and abstraction loke ‘Taller’, ‘Ama-zona’ or ‘Canciones napolitanas’. Hirsch explores all the paths of experimental cinema and makes them her own approaching to themes that are genuine to her: female body, landscape, nature, and Argentinian tradition.

Narcisa Hirsch was born in Germany in 1928, though she has lived in Argentina since childhood. Her name has remained obscure for too long due to her double eccentricity: of being a woman and of making films far from major centres where the history of experimental film has mainly been made: The United States and Europe. This double, uncentered condition did not, however, prevent her from keeping up with world movements in experimental and video art, and her work -simultaneously personal, domestic, mystical, and characteristically unique- maintained a relationship with the authoritative names and films in video and experimental art, though always shying away from imitation and claiming cinema as a space for freedom.

Hirsch began working in art as a painter and illustrator in the 1960s and quickly made the leap into the public sphere performing happenings in search of a new audience. Understanding cinema and creation as a collective process of work and thought, she built up a close-knit community around her film and artistic practice from the start of her career, a dispersed network of experimental artists and filmmakers who came together through the Unión de Cineastas de Paso Reducido (UNCIPAR) around the Goethe Institute and the Di Tella Institute, and which originally included names such as Marie Louise Alemann, Claudio Caldini, Jorge Honik, Juan José Mugni, Horacio Vallereggio and Juan Villola, who ended up being crucial to the formation of the independent and experimental scene in Argentina. A network and a powerful concept of the collective that continues to this day, when, at over ninety years of age, Hirsch holds weekly meetings (in-person before the pandemic, now via video-conferencing) with an extensive network of young filmmakers and experimental film buff whom she has taken under her wing.