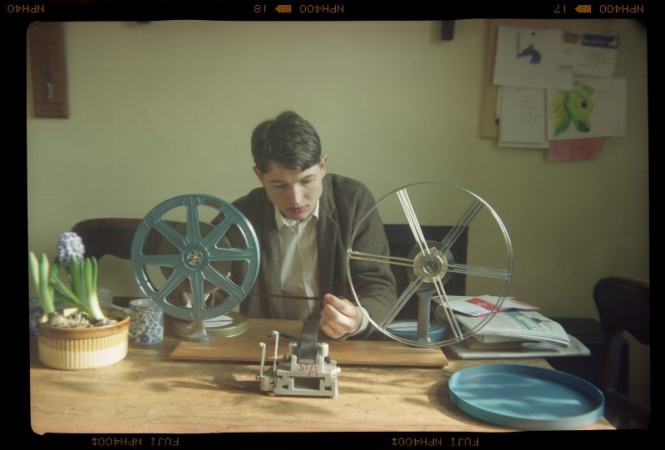 The renowned artist, filmmaker and musician Luke Fowler, nominated to Turner Award in 2012, will have a retrospective in Reina Sofía Museum, one of the collaborating outlets of the 18th edition of Documenta Madrid, the International Film Festival of the City Council of Madrid. Organized in the frame of the collaboration between the two institutions that begun in 2019, the retrospective ‘A Certain Predilection for Things Out of the Ordinary: The Films of Luke Fowler’ presents a tour around the British creator’s work, exploring the relationship between the subject and the archive and between memory and history through the possibilities of cinema.

The retrospective includes the Spanish release of Fowler’s latest film, ‘Patrick’, that will open the festival in Cineteca Madrid on May 26th at 19.30h. An illuminated portrait of Patrick Cowley, pioneer of the electronic music in San Francisco that passed away from AIDS in 1982. The opening screening will be followed by a performative conference that will evoke the emotional atmosphere of the late 80s San Francisco by the musician Jorge Socarras and Luke Fowler himself.

One of the most accurate descriptions of Fowler’s work could probably be a way of portraying things that does not meet any standard. In his films, in the limits of documentary, essay and experimental cinema, he shows the experiences of heterodox subjects through audio-visual fragments of their lives, as well as a material environment and landscape carefully shot and edited in sparkling 16 mm with an insuperable rhythm.

“The main feature of Luke Fowler’s cinema might be its rhythm, because sound and image are intertwined and that beat emerges from the soundtrack, but does not circumscribe to it. The singular conception of editing of the artist creates patterns and pulses, a nervous feeling, hypnotic and physically intense that fits with his restless curiosity for the subjects he portrays. One of the first phrases of ‘Electro-Pythagoras (a Portrait of Martin Bartlett)’ shows the best way to describe these unique and delicate sound and movement and stories and subjects combinations: a certain predilection for uncommon things”, explains the artistic commissioner of Documenta Madrid James Lattimer.

Works in the retrospective
Cultural history outsiders or personalities that nearly receive or have received attention are one of the main themes of Luke Fowler’s work. It is the case of the filmmaker and poetess Margaret Tait (Houses [for Margaret]); the British photography collective, feminist and pioneer Pavillion (To the Editor Of Amateur Photographer); the founder of anti psychiatry, R.⁠ D. Laing (All Divided Selves); the remote communities of the Scottish Highlands (Depositions), the invisible residents of a Glasgow neighbourhood (Anna, Helen, David y Lester) or even his own mother (Mum’s Cards).

Fowler’s films are compassionate portrays that generate feelings or moods before any notion of integrity or linearity, dwelling in spaces where these diverse individuals spent their lives and compiling materials that collected through time.

His cinema always turns to be a listening exercise at the same level as a viewing one, because music and sound are built-in in his films. Fowler, who is also a musician with a successful career, portrays musicians generously within this wide gallery of outsiders and unorthodox individuals. It happens with the homosexual precursor of electronic music Martin Bartlett (Electro-Pythagoras [a Portrait of Martin Bartlett]), the New England composer and professor Christian Wolff (For Christian) and the British sound artist Sue Tompkins (Country Grammar [with Sue Tompkins]). Furthermore, surrounding sound landscapes and musical accompaniments that are a built-in part of Fowler’s work are made with direct collaborations sound artists, composers and sound engineers, like Lee Patterson (A Grammar For Listening – Part 1), Éric La Casa (A Grammar For Listening – Part 2) or Toshiya Tsunoda (A Grammar For Listening – Part 3, Cézanne).

Luke Fowler (1978) is an artist, 16 mm filmmaker and musician settled in Glasgow. He studied printmaking in Duncan of Jordanstone College of Art and Design en Dundee. He creates cinematic collages that have often been linked to the British Free Cinema movement of the 1950s. His para-documentary films have explored counter cultural figures including Scottish psychiatrist R. D. Laing, English composer Cornelius Cardew and Marxist-Historian E.P. Thompson. As well portraits of musicians and composers he has also made films and installations that deal with the nature of sound itself. Luke Fowler has worked with a number of collaborators including Eric La Casa, George Clark and Peter Hutton Mark Fell, Lee Patterson, Toshiya Tsunoda and Richard Youngs. He collaborated with guitarist Keith Rowe and film maker and curator Peter Todd on the live sound and film work The Room.

18th International Film Festival Documenta Madrid
Documenta Madrid, the el International Film Festival of Documentary Cinema supported by the City Council of Madrid with the collaboration of other cultural venues of the city and organised by Cineteca Madrid, a space of the Cultural Area of the City Council of Madrid, returns again to Madrid to promote the best cinema coming from all over the world, focusing on contemporary cinema and putting special interest in news aesthetic proposals, films inspired on the diverse non-fictional forms, and look into the audio-visual forms, no matter its definition, length, gender or category. It will take place from May 26th to June 6th in its on-site version and from May 31st to June 6th through the VOD platform Filmin. The award ceremony will take place on May 30th.

Documenta Madrid will host the release of a total of 24 films from 15 different nationalities in the capital within its National and International competing sections. Some of them have been previously premiered in festivals like Sundance, Visions du Réel, Berlinale or Rotterdam and others will have their world premiere in Documenta Madrid.