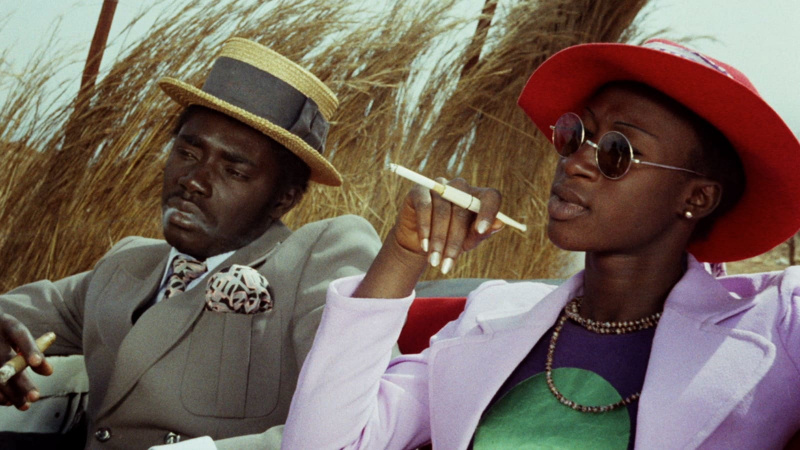 The renowned Senegalese filmmaker, actor, and poet Djibril Diop Mambéty and his niece, the French-Senegalese filmmaker and actress Mati Diop, will have a double retrospective presenting their respective entire filmographies in Filmoteca Española, one of the venues collaborating with the 18th Edition of Documenta Madrid, International Film Festival organised by the Cultural Area of the City Council of Madrid.

In the retrospective ‘Djibril Diop Mambéty + Mati Diop: Different Versions of The Same Sun’ the filmographies of both authors dialogue with an evident intersection point: Djibril Diop Mambéty and Mati Diop are family, a bond, and a film heritage that Mati Diop analyses in one of her films. Starting from this bond between two cinema eras and two film careers, the retrospective invites the attendees to discover the entire work of a master and a young filmmaker. Beyond the familiar relationship, the strong interest towards Dakar city and the political representation of those whose desires and dreams are not normally represented in the big screen -people of the streets, migrants, hopeful teenagers -, also create other forms of relationship between two works with obvious differences; each of them grew up in a different continent, they had a different education, and they made their films in very different contexts.

‘Djibril Diop Mambéty + Mati Diop: Different Versions of The Same Sun’ retrospective can be enjoyed from May 27th to June 4th in Filmoteca Española and will screen 14 titles: the restored versions of some of the most mythical Mambéty’s films, and the entire works of Mati Diop as director.

Starting from Mambéty’s first short film ‘Contras’ City’, in which he captures in an easy and imaginative way the convulsive social atmosphere of Senegal in the late 60s, Filmoteca Española will screen six more films of the African filmmaker: ‘Badou Boy’, ‘Touki Bouki’ (restored in 2008 by The World Cinema Foundation in Cineteca di Bologna/L’Imaggine Ritrovata in collaboration with Djibril Diop Mambéty’s family), ‘Parlons Grand-mère’ and ‘Hyènes’ (restored in 2018 by Thelma Film AG with the support of Cinémathèque Suisse), ‘Le Franc’ (restored in 2019 by Waka Films with the support of Institut Français, Cinémathèque Afrique and CNC - Centre national du cinéma et de l’image animée) and his last film ‘La Petite Vendeuse de Soleil’, a “small” story as powerful as the sun. A sun that appears in the film in numerous occasions as information, as support, as vocation and as a new version of itself each time we think of it. A sun that titles the retrospective and is a fragment of undeniable reality no matter the context or era.

Regarding Mati Diop’s works, Filmoteca Española will screen seven films, including her celebrated first feature film ‘Atlantique’, that won the Great Jury Prize in 2019 in Cannes Film Festival, being Mati Diop the first black woman to be nominated to the Palme d’Or. Ten years before, Diop released her first short film of similar title, ‘Atlantiques’, that won the Tiger Award in the international film festival of Rotterdam and that can also be seen in the retrospective. Beyond these debuts, Documenta Madrid also brings five tittles of the French-Senegalese filmmaker to Madrid: ‘Big in Vietnam’, ‘Snow Canon’ and ‘Liberian Boy’ (codirected by Manon Lutanie); ‘Mille Soleils’, that investigates the personal and collective legacy of his uncle’s film ‘Touki Bouki’; and her most recent short film ‘In My Room’, a reflection of her own practice as filmmaker shot during the lockdown in Paris last year.

About Djibril Diop Mambéty and Mati Diop
Djibril Diop Mambéty was born in Colobane, Senegal, in 1945. He studied acting and worked in theatre before making his first film, the short Contras' City (1969), at the age of 24 without any formal training in cinema. This was followed by another short, Badou Boy (1970), before he made his feature debut with Touki Bouki, a Nouvelle-Vague-inflected tale of young fashionable couple on the run in Dakar who dream of Europe that has since been hailed as one of the greatest African films of all time. Despite the film’s acclaim, including a hard-won premiere at Director’s Fortnight in Cannes, it was to be nearly 20 years before Diop Mambéty would make another feature, with only the short Parlons Grand-mére (1989) serving as a stopgap in between. Hyènes, an astute, devastating adaptation of Friedrich Dürrenmatt’s The Visit that injects the ambivalences of consumerism, the World Bank and post-colonial African realities into the classic Swiss play, was also received rapturously and seemed to usher in a new phase in Diop Mambéty’s career.

Mati Diop was born in Paris in 1982 and first received attention as an actress, making her screen debut in 35 Shots of Rum by Claire Denis. Following some self-funded video work, she went on to attend Le Fresnoy and completed her first short Atlantiques (2009) there, which went on to win the Tiger Award at the Rotterdam International Film Festival. Centred on a group of young Senegalese, discussing their hopes of crossing the sea in search of a better life and expressing a desire for change, this assured debut already exhibits one of the same constants that runs through Diop’s entire oeuvre, including the aforementioned Mille Soleils and Big in Vietnam (2011): the political situation of those not usually given a voice, the fates and feelings of characters in (economically-dictated) transit, the mechanisms of their desire and the way in which their identities are shaped by this state of transit. Her cinema is one of constant movement, whether physical, emotional, and even fantastical or imagined. Between documentary and fiction, the concrete and the spectral, Diop's films always capture a particular state of fragility, the twilight of a setting sun, waiting for another to be born.

18th International Film Festival Documenta Madrid
Documenta Madrid, the International Film Festival of the City Council of Madrid with the collaboration of other cultural outlets of Madrid and organised by Cineteca Madrid, a space of the Cultural Area of the City Council of Madrid, lands again in Madrid and from Madrid to Spain on its online format, to para offer the best cinema from all over the world, focusing on contemporary cinema and specially on new aesthetic proposals, films that explore the new audio-visual forms no matter their definition, duration, gender or category. It takes place from May 26th to June 6th in its on-site version, and between May 31st and June 6th online through the VOD platform Filmin. The awards ceremony will take place on May 30th.

Documenta Madrid will release a total of 24 films from 15 different nationalities in its National and International competing sections. Some of them have been recently released in festivals like Sundance, Visions du Réel, Berlinale or Rotterdam and others will have their world premiere in Documenta Madrid.