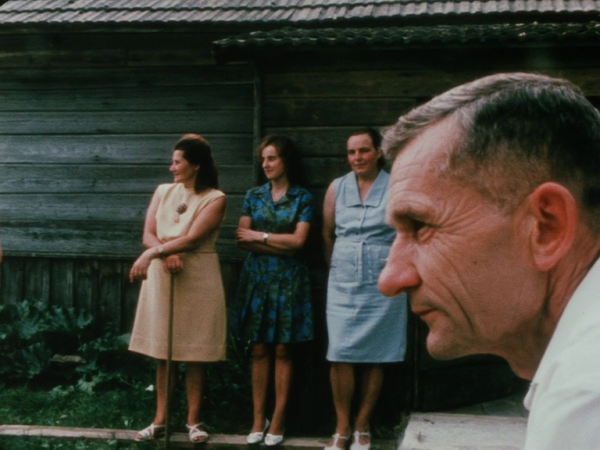 On the occasion of the centenary of the birth of Jonas Mekas, in December 1922, Documenta Madrid and Filmoteca Española, collaborating venue of the 19th edition of the International Film Festival of the Culture Area of the Madrid City Council, join the worldwide initiative to commemorate this absolute reference of non-fiction cinema with a very special program. The retrospective Jonas Mekas. Glimpses of life seeks to rediscover and raise awareness of the films of this essential poet of the everyday and establishes a dialogue with the present, offering a contemporary view of Mekas' influence on the audiovisual community.

From May 24 to 29, in this retrospective divided into six sessions, the screening of some of his most outstanding works, such as Birth of a Nation, Lost Lost Lost, Reminiscences of a Journey to Lithuania, Sleepless Nights Stories, Diaries, Notes & Sketches (Walden), and As I Was Moving Ahead Occasionally I Saw Brief Glimpses of Beauty, are offered to the public presented by creators, collectives and filmmakers who dialogue and debate with Mekas' work.

A journey through Mekas' filmography and the conceptual range he proposes: the filmed diaries, the aesthetics of the unrepeatable and the ephemeral, the collective creation in that countercultural golden age, the fragmentation, analysis and distancing of reality, are some of the hallmarks of the Mekas universe that the festival seeks to unravel and share with the public. In Mekas' cinema, his cinematographic experience, as a spectator, as a creator, as a thinker, is inseparable from the experience of that pedestrian who, as he walks, is intoxicated by impulses he had not foreseen.

Sessions that dialogue with Mekas's cinema

Documenta Madrid wants to pay tribute to Mekas by doing something alive, something that transcends the movie theater and floods the street. Four viewing sessions that involve current creators in their contextualization, the festival pays tribute to the artistic contributions of the Lithuanian-born filmmaker, a benchmark in the experimentation of American cinema, but also, and above all, allows to map the drifts of Mekas' work in different artistic disciplines, expanding borders and recognizing the expansive capacity of avant-garde film art.

The session dedicated to the film Lost, Lost, Lost (Jonas Mekas, 1976) will be presented by Efrén Cuevas, author of the book Filming History from Below: Microhistorical Documentaries, and
professor of Audiovisual Communication at the University of Navarra.

In another session, Meritxell Colell is invited to be part of this celebration, where she proposes her latest piece, La ciutat a la vora, a sound and visual map that assembles a symphony of her city, its people, its spaces and origins, in a journey that follows in the footsteps of the Mekas record.  Much has been said about the figure of Mekas as the first vlogger in history, and in another of the sessions a step beyond the individual look of a vlog is taken to a polyhedral artifact of the audiovisual language of social networks by the collective of creators Nuberu Bagu.

And finally, Orquestina de Pigmeos, a collective formed by musician Nilo Gallego and audiovisual creator Chus Domínguez, proposes in another session a musical intervention in direct dialogue with Mekas himself on the screen to celebrate with him all the flashes of life he has left us, evoking and paying tribute to that festive, performative, provocative spirit of the unexpected, the unrepeatable, so linked to happenings.

About Jonas Mekas
Jonas Mekas (1922-2019) was a Lithuanian filmmaker, writer and curator, considered the godfather of American avant-garde cinema and an absolute totem of diaristic cinema. In addition to his work in the preservation and dissemination of cinema with the creation and development of the Anthology Film Archives, films of his authorship such as Walden (1969) or Lost Lost Lost (1976) have illuminated the path of more and more filmmakers in the world.