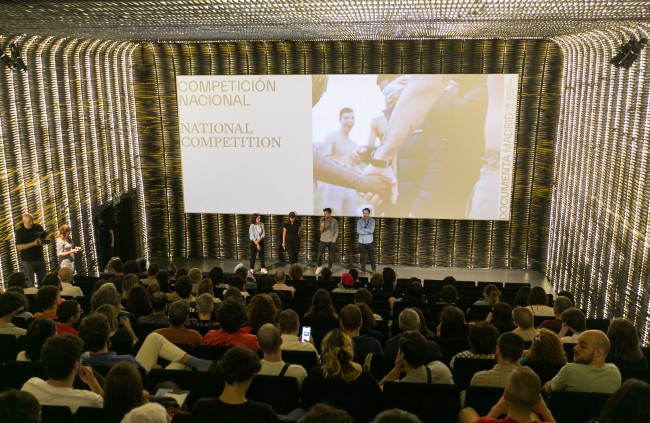 Nearly 12,000 spectators attended the 19th edition of the Documenta Madrid International Film Festival, organized by the Madrid City Council's Department of Culture, Tourism and Sports. The festival's on-site activities brought together 3,416 people, 1,300 more spectators than the 2,032 of the previous edition (a 68% increase compared to 2021), while the digital side of the festival, with limited viewings as a novelty this year, has reached 8,544 spectators.

A total of 930 films of 77 different nationalities were registered to participate in the competitive sections of this edition. Of these, 271 are Spanish productions or co-productions. The Final Cut section, aimed at films in the final stages of Spanish production or co-production, received a total of 36 entries from projects with an advanced editing cut. Once again this year, the festival has been showcasing the best cinema from around the world, focusing on contemporary cinema and with a special interest in new aesthetic bets, films that are inspired by the diverse forms of non-fiction, and that explore audiovisual forms regardless of their definition, duration, genre or category. In line with the changes incorporated in recent editions of the festival, the 19th edition of Documenta Madrid has deepened the defense of a cinema without labels. Combining the work of the most renowned filmmakers with surprising debuts, the festival has offered on-site programming at Cineteca Madrid, as the main venue, as well as at two collaborating venues: Museo Reina Sofía and Filmoteca Española.

As a novelty this year, Documenta Madrid has incorporated capacity control in the viewing of its online programming through the VOD platform Filmin, in a commitment to the distribution and exhibition sector in theaters, seeking models of sustainability between the digital dissemination of content and the traditional model of viewing on the big screen. With this formula, the festival has had 8,544 online viewers who have enjoyed a program designed especially for VOD Filmin, contributing to responsible consumption through digital platforms and deepening the debate on the future of movie theaters. The commitment to the professional sector was also reflected in the parallel activities for professionals and the public in training, such as the workshops on economic and environmental sustainability given in collaboration with the ECAM, or the Dialogue Forum, which explored the present and future of documentary filmmaking in Spain.

Festival evaluations
Luis E. Parés, artistic director of Cineteca Madrid, declares that "as a festival, we have felt responsible for gathering all the questions generated by the current scenario and to provoke answers through the designed contents. We have not wanted to be a simple documentary exhibition space, but a place where we can confront the realities that are collected in the program with proposals from internationally recognized filmmakers and new voices. After the pandemic, Documenta Madrid 2022 wanted to recover the collective audiovisual experience understood as an activity of essential dialogue between the spectator and the cinema".

For their part, artistic curators Mariana Barassi and Diego Rodriguez affirm that "the festival has been able to verify the strength of contemporary creation, the involvement of documentary film industry agents and the public that has participated in the different activities, showing a sector in constant search, alive and in tune with the changes of the new screens and audiovisual tools. The dialogue between established artists and new directors has reinforced one of the pillars of the last edition, as well as the promotion of the most daring national creation, which represents a high percentage of Spanish cinema seen abroad".

Outside the official dates of the Festival it is still possible to enjoy the Documenta Madrid program until June 25 at the Reina Sofia Museum with the retrospective Stop forbidding that I can't disobey everything that Documenta Madrid and the Reina Sofia Museum dedicate to the cinema of Gonzalo García-Pelayo. A journey through the films made between 1976 and 1986 by one of the fundamental cult authors of international cinema, rediscovered in recent years.

In the Final Cut section, aimed at films in the final stages of Spanish production or co-production, the €4,000 prize went to Remember my name, by Elena Molina, and a Special Mention was also awarded to Cuba y la noche, by Sergio Fernández Borrás. The CineZeta Young Jury Award went to El día que volaron la montaña, by Alba Bressolí. Finally, the Audience Award for Best International Film went to Jay Rosenblatt's How Do You Measure a Year? and the Audience Award for Best National Film went to Irene M. Borrego's La visita y un jardín secreto.

24 films in competition, 4 projects in the Final Cut
The 24 films selected for competition in all sections have competed under equal conditions and awards regardless of the length of the works. Spectators were able to enjoy in person the films in the National and International Competitions, as well as the closing film Terminal Norte, by Lucrecia Martel. The Final Cut section also had 4 screenings reserved for invited professionals.

Filmoteca Española and Museo Reina Sofía were also the venues in charge of hosting, respectively, the retrospectives Jonas Mekas. Destellos de vida and Dejen de prohibir que no alcanzo a desobedecer todo dedicated to the films of Gonzalo García-Pelayo.

Spectators attending the opening of the festival were able to enjoy the Spanish premiere after its presentation at the Berlinale of Rewind & Play by Alain Gomis, a film that collects unpublished excerpts from a 1969 interview with the legendary jazz pianist and composer Thelonius Monk. The closing ceremony of the festival included the screening of the musical episode Terminal Norte, by the great Argentine filmmaker Lucrecia Martel, followed by a performance by the artist Verde Prato. A dialogue between two women who delve into their musical traditions.

Most of the Festival's jurors were also present at the Festival. In the National competitive section Juana Dolores, Juan Barrero and María Campaña; in the International competitive section Christopher Allen, Javier Olivera and Nathalie Trafford; finally, a 100% female jury formed by Ana Puentes, Arantxa Aguirre and Serrana Torres, in charge of evaluating the projects selected for the Final Cut, a section aimed at films in the final stages of Spanish production or co-production.

Parallel activities
As a novelty in this edition, the Vaya Panorama section has opened a window to the most risky creation of today to support a new way of being in theaters and interact with the viewer's gaze. The first Documenta Madrid Dialogue Forum: Present and Future of Documentary Film in Spain was also held, a professional meeting space for agents from different areas of creation, production, programming and exhibition, in which to seek new paths for documentaries and make them more solid in their commercial life. Finally, in its commitment to the training and education of creators and professionals in the documentary industry, 3 free workshops were given by the ECAM, School of Cinematography and Audiovisual of the Community of Madrid.

Documenta Madrid 2022 is possible thanks to the following sponsors and collaborators: The festival is organized by Cineteca Madrid (Area of Culture, Tourism and Sport of the Madrid City Council) with funding from the Government of Spain (ICAA). It has the Reina Sofía Museum and Filmoteca Española as collaborating venues; with the collaboration of ECAM and Madrid Film Office; and with the support of Filmin and Instituto Confucio de Madrid.