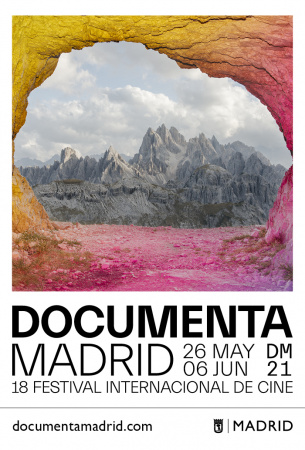 Documenta Madrid, the International Film Festival of the City Council of Madrid, presents the official image of its 18th edition, this time created by the Nordic artist duo Inka & Niclas Lindergård. It also presents the names of the National, International and Final Cut sections jury members. The festival, organised by Cineteca Madrid, a space of the Cultural Area of the City Council of Madrid, will take place from 26 to 30 May in its on-site version , with the award ceremony on May 30th, and from May 31st to June 6th in different outlets, and online through the VOD platform Filmin.

Inka & Niclas Lindergård, creators of the visual identity of the Festival

The visual identity of this year continues the renovation proposal of the past edition. The image series of the 18th edition of Documenta Madrid poster have been created by the artist duo Inka & Niclas Lindergård (Finland, 1985, and Sweden, 1984), whose work is based on materiality of photography, the contemporary perception processes of nature and the connection of the photographic medium with the stylisation of landscape. Their work is an open portal to the hyperrealistic synthesis of beauty, kitsch and visual desire in the language of photography. Their works have been exhibited in Paris Photo 2016 or Haute Photography 2019 in Rotterdam, among others, and have been awarded with the Swedish Photobook Price in 2017 and 2012.

This editions image presents natural landscapes photographs analogically coloured with light and filters used in pre-production. A possible colourist metaphor of how cinema expresses reality, always through the filter of author’s gaze and the context of the work itself.

Documenta Madrid 2021 will have nine jury members from different countries in its National, International and Final Cut sections.

Documenta Madrid, the el International Film Festival of Documentary Cinema supported by the City Council of Madrid with the collaboration of other cultural venues of the city and organised by Cineteca Madrid, a space of the Cultural Area of the City Council of Madrid, returns again to Madrid to promote the best cinema coming from all over the world, focusing on contemporary cinema and putting special interest in news aesthetic proposals, films inspired on the diverse non-fictional forms, and look into the audio-visual forms, no matter its definition, length, gender or category.

The festival includes two competitive sections, International and National, each with its own award. The new feature introduced last year whereby feature films and short films competed for the prizes in each section on equal terms, is maintained and another new feature is added this year, the aforementioned transformation of the Fugas category into the Fugas Award for innovation and creative risk-taking.