Madrid gets overtaken by the 16th DocumentaMadrid Festival 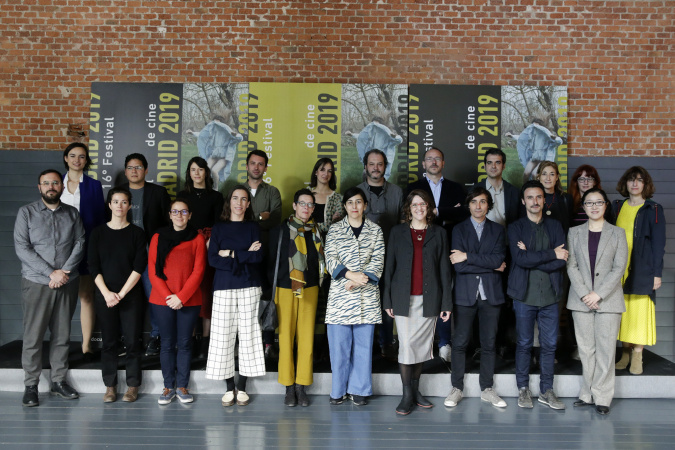 Rita Maestre, the Official Spokeswoman of the Madrid City Council, highlighted the importance of this festival, which puts the city of Madrid on the national and international map of festivals as a key event for documentary filmmakers. In addition, the City Council spokeswoman has pointed out that "the alliance with cinema is necessary in any society committed to cultural diversity and to a culture meant for everyone in Madrid".

For his part, David Varela, co-director of the festival with Andrea Guzmán, said that "a public festival with 15 editions under its belt is obliged to shore up its position as a major event for its citizens and for all professionals in the audiovisual sector and the world of culture. And that is just what DocumentaMadrid is becoming. "

This is the shared, common goal of both the Festival’s main venue, the Cineteca Madrid, as well as the other major cultural venues in Madrid that have participated in the presentation of the program that each will host: Nieves Blanco, director of programming at the Casa de América; Chema González, Head of Cultural Activities at the Reina Sofía Museum; Anne Louyot, Cultural Counselor of the Embassy of France and Director of the Institut français of Spain; Manuel Asín, coordinator of Film Department at the Círculo de Bellas Artes; Daniel Fernández, founding partner of Sala Equis; Cristóbal Fernández, Vice-Dean of Students at the Information Sciences Department of the Complutense University of Madrid.

In the words of Gonzalo de Pedro, "Documenta Madrid and the Cineteca Madrid would not make sense, nor would they even exist, without one another. The Cineteca is in the DNA of DocumentaMadrid, and DocumentaMadrid is in Cineteca's, which promotes, hosts and expands the festival. At the Cineteca, the year does not start in January, but rather with the opening of Documenta Madrid, which guides the path along which we will spent the rest of the year".

DocumentaMadrid launches this message to its attendees for the upcoming edition: "Awaken your critical eye, boost your creativity and participate in citizen debate".

The programming for the 16th DocumentaMadrid is made up of over one hundred films, a large majority of which will be making their Spanish premiere (77 out of 123 titles).  The competitive and informative sections include films from 35 different countries, most notably this year from Belgium, Germany, Argentina and France. "Through these works, our audiences will not only enrich and broaden their minds, but will also get the chance to talk with the filmmakers, discover some of the new voices that are creating innovative languages and forms", explains Andrea Guzmán, co-director of the Festival.

Some of the central themes of this year's edition will be postcolonial visions, political conflicts, human rights and the relationships between art and life. A program that aims to go beyond "a supposed objectivity in news reporting and of that dangerous spectacularization of images bombarding us daily from an endless number of fronts", as the festival directors say.

The International Section is made up of 18 films that will making their premiere in Spain, including the latest works of already well-established directors like Nikolaus Geyrhalter (The Border Fence, premiered at IDFA), Eric Pauwels (Journal de Septembre, world premiere at DocumentaMadrid), and the duo of Bénédicte Liénard and Mary Jiménez (By the Name of Tania, premiered at Berlinale - Generation). After making their way through the Berlinale, the highly-anticipated Selfie by Agostino Ferrente and Midnight Traveler by Hassan Faziliwill be making their premieres in Spain. There are also some "lovely discoveries by new directors", adds Guzmán, "like the young Spanish director Arantxa Hernández with City of Children; the French filmmaker Laure Portier with Dans l'oeil du chien; and The Sleeper, by Alexandra Gerbaulet and Mirko Winkel. "

The National Section is also full of directors who have found acclaim both within and beyond our borders, as well as new voices on the documentary film scene. Some of the most widely-anticipated feature films are Hasta que las nubes nos unan, Guardiola-Diola, by Lluís Escartín, Idrissa: Chronicle of an Ordinary Death by Xavi Artigas and Xapo Ortega, Una corriente salvaje by Nuria Ibáñez (Best Feature Film at the Morelia Film Festival), The Fourth Kingdom by Àlex Lora and Adán Aliaga, who worked on the project in the 1st Corte Final of DocumentaMadrid. Also in competition are Ojo guareña by Edurne Rubio, Apuntes para una herencia by Federico Robles, Para la guerra by Francisco Marise and Out of the Gardens by Quimu Casalprim. Some of the most outstanding young filmmakers in the short film competition are María Elorza (Ancora lucciole), Laura Herrero (¿Me vas a gritar?), Sofía Farré (New Face), Rocío Morato (Las casas que nos quedan), Andrea Morán (Yo siempre puedo dormir pero hoy no puedo, co-directed with Fernando Vílchez), Enric Ribes (Greykey). And some of the more experienced directors in the selection include Nayra Sanz (Selfie), who participated in the last two editions of the Festival, Miguel G. Morales (Àngel caído), Miguel Ángel Jiménez (Kafenio Kastello), Jesús María Palacios (Labo).

The International Fugas Section brings together cinema that will make audience members reflect on the limits of documentary film and discover new languages and formats. In competition here will be some works that have already been featured at major festivals around the world, such as La ciudad oculta by Canarian director Víctor Moreno, Mitra (Jorge León), Teatro de guerra (Lola Arias), Fordlandia Malaise (Susana de Sousa), Operation Jane Walk (R. Klengel, L. Müllner) and I Have Sinned a Rapturous Sin (Maryam Tafakory, who won the Best Short Film Award in the Fugas competition at last year's edition).

The journeys of Casas, Beckermann and Maldoror

This year's festival will enjoy the presence of three major figures in documentary film and visual arts to whom retrospectives will be held:  Ruth Beckermann, Carlos Casas and Sarah Maldoror.

In collaboration with Nave 0 of Matadero Madrid and its new curatorial program Depth of field, the Spanish, Paris-based visual and sound artist Carlos Casas,  will also be attending: "Carlos Casas and his work well-represent and exemplify one of the new core areas that the Cineteca program is exploring: with his feet firmly planted in the real, Casas expands documentary filmmaking to bring it into touch with art, with the experimental, with a kind of filmmaking that gets made live and in person, while also challenging the notion of completed works with work that stays in a permanent state of revision and expansion. It is a luxury for Documenta Madrid, in collaboration with Matadero Madrid and Cineteca Madrid, to be presenting the first complete retrospective of an artist still little known in his native country," explains Gonzalo de Pedro, artistic director of Cineteca Madrid.

Also with the Filmoteca Española, the Festival is presenting a retrospective of Ruth Beckermann, which can be seen at the Cine Doré. The Austrian filmmaker has devoted a great deal of her film work to historical memory, social struggles and identity-building in Europe and the Middle East. According to Carlos Reviriego, the deputy director of programming at the Spanish Film Archives (Filmoteca Española), "it is worth noting how other countries with traumatic events from the past, for instance Germany, have tackled the question of historical memory, and how Beckermann succeeds in threading it with works of true artistic creation ".

After an absence of several years, the Reina Sofía Museum is back as an official venue for the 16th edition, sharing the retrospective on Sarah Maldoror, "the Négritude poet and filmmaker". Chema González, the museum's Head of Cultural Activities believes that "studying her unjustly-neglected work entails relating feminism and decolonization in a new film geography, in addition to thinking about how to 'give an image' to those excluded from discourse and representation" It is the first time that practically all of Maldoror's work will be seen in Spain.

Another classic Festival venue is the Casa de América, which is collaborating on the film series entitled Signed Mirrors. "We are proud to collaborate with DocumentaMadrid in making possible this film correspondence between programmers and filmmakers from both sides of the Atlantic, which will give us a closer look at Mexico, Peru, Cuba, Argentina, Colombia, Brazil through cinema", notes Nieves Blanco, director of programming for the Casa de América.

The collaboration with the Institut français gets tighter at this year's 16th edition. Anne Louyot, Cultural advisor from the French Embassy and director of the Institut français of Spain, states that "it is an honor to host the special sessions of the latest films by two emblematic French directors -Nicolas Philibert and Rithy Panh-, in which they deal with universal issues through personal themes. " She also highlighted their collaboration on the meeting with Bruno Patiño, editorial director of channel ARTE, and the round table discussion on the figure of Sarah Maldoror.

The Festival is also getting back the collaboration with the Círculo de Bellas Artes, which is once again an official venue of DocumentaMadrid. The coordinator of the Film Department, Manuel Asín, is happy to host the series "War Scenarios". "We celebrate becoming an official venue once again because we share DocumentaMadrid's aim of finding new ways of expression, its purpose of making cinemas once again spaces of amazement, of encounter".

Part of the "War Scenarios" series will also be screened at the Information Sciences Department of the Complutense University, which for the first time will be an official venue and will also be participating through a call for academics to enter films related to the series: "With DocumentaMadrid, we have for the first time invited the university community to share in audiovisual format their own reflections on the aftermath of wars", announces Cristóbal Fernández, Vice-dean of Students and Communication of Information Sciences Department at the Complutense University.

The Sala Equis will once again host the DocumentaMadrid program and its classic party open to the festival public. "In our second year of life, we are once again collaborating with an exhibition of the three competitive sections, in addition projecting award-winning films", explains the founding partner Daniel Fernández Cañadas.

The various activities organized at these venues delivers on the Festival's desire to share the latest innovations in the audiovisual sector and further knowledge about documentary cinema: the seminar on the relationship between Artificial Intelligence and Art, round tables, professional and matinees meetings for schools will be just a few of them.