The audiovisual industry meets at DocumentaMadrid 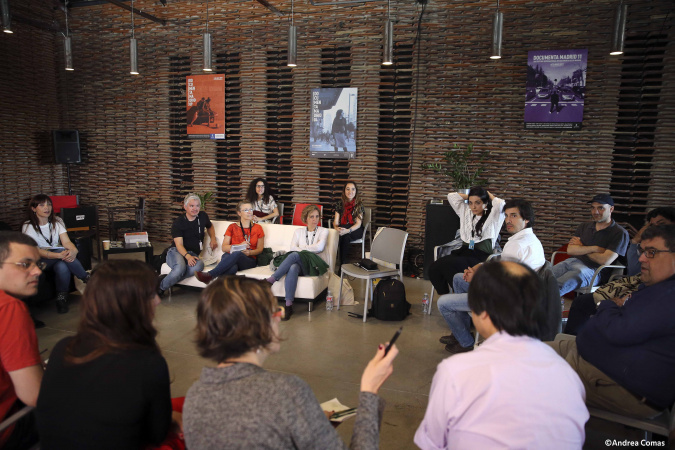 Every year, the DocumentaMadrid Festival features spaces dedicated exclusively to professionals, the epicenter of which is the Matadero Madrid Workshop, located opposite the Cineteca. There, the now traditional meetings will be held between the directors competing in the Official Section, together with the filmmakers and accredited professionals. "DocumentaMadrid hopes to open up a line of dialogue between filmmakers and experts in order to foster constant and fluid debate, which will provide a raison d'être to the idea of ​​a film community, which we hope to make up part of the festival's defining identity", state the directors Andrea Guzmán and David Varela.

Now in its second year, DocumentaMadrid is holding the Professional Forum CORTE FINAL, in which four projects in an advanced state of editing or postproduction will participate and the directors of which will share their work in progress with experts, filmmakers and consultants. The selected projects A media voz, La Mami, Pedra Pàtria  and La educación sentimental will also compete for an award for the final phase of film completion and its promotion, awarded by several companies and major institutions in the audiovisual industry: Aracne DC, DRAX audio, NUMAX, DOCMA, Festhome and 36 caracteres.

Another one of the parallel activities for the professional public will be the meeting with Bruno Patiño, editorial director of the channel ARTE, who will inform producers and audiovisual creators as to the editorial lineup of one of Europe's major cultural media outlets. During his talk, Patiño will explain the characteristics of the content and formats used in the audiovisual productions supported by ARTE. In addition, he will explain what the usual design of its productions is like, the degree of creative freedom it provides to directors and producers, as well as new sources of documentary funding in Europe. He will also address the current state of non-fiction production and the responsibility of the states in creating and disseminating this type of content.

This professional meeting is being held thanks to collaboration from the Institut Français and will take place in the Plató Hall on Tuesday the 14th at 12 noon.  Free admission with prior registration, open until May 13th.

"Sound is the co-star of any film, but if you don't know how to work with it, you lose an ally and gain an enemy". It is with this warning that DocumentaMadrid and DRAX audio call on professionals in the audiovisual sector to come participate in a round table on Monday May 13 at 12 noon, also in the Plató Hall at the Cineteca Madrid. Admission is free (with prior registration until May 7) to this highly practical activity, which will feature Carlos de Hita (nature sound technician), Daniel Rodrigo Hitos (Head of Sound at La Caña Brothers) and Charly Schmukler (Sound Mixer and Sound Supervisor), moderated by Javier Vacas (general director of assetMedia and consultant).

This year, the WALDEN Residences Space, will also be presented on Tuesday, May 14 at 11am at the Matadero Workshop (free admission). WALDEN is a documentary filmmaking residency consisting of a meeting held every two months on the outskirts of different cities in Latin America. For each meeting, seven projects are selected for the aim of achieving the best possible version of each film.  The producer Marta Andreu, director of the WALDEN project, will present this initiative within the framework of the DocumentaMadrid Festival in order to publicize the program's new itinerary in Europe: Spain, Portugal and Iceland are joining the route.

At the Archive of the Cineteca Madrid, a consultation table for the programs for financing, training and distribution will be set up by the MEDIA España Office on the days of May 15 and 16 for those attending the festival, with prior request for an appointment.